Some developments in China that could become a bigger problem should the economy continue to stagnate.

It is becoming a past time over the last 20 years for analysts to predict the collapse of the Chinese economy.  However, we have concluded that until there is a USD squeeze, the Chinese government can maintain its unsustainable, parallel banking system.  Because it is difficult for savers to invest abroad, domestic investors have sought out various outlets to preserve wealth.  According to a recent survey done by the PBoC, 70% of urban household debt is tied up in real estate.  This made sense in times of strong trends in urbanization.  Following the coronavirus outbreak, some 50mm workers have moved back to the countryside.  This makes sense when looking at migrant worker finances and access to healthcare.  On average the virus recovery is about 21 days and it was cheaper to move back to the countryside than take the risk of contracting the illness.  Until there is a vaccine, long-distance migrant workers will either require higher wages to take the risk of moving back to an urban area or wait in the countryside for a vaccine.  Below is a graph of long-distance migrant workers in millions: 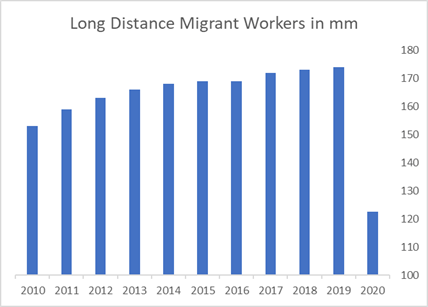 Since long-distance migrant workers are unlikely to return to cities any time soon, it’s worthwhile to assess if there is any risk to urban real estate.  According to a recent survey of 30,000 homes on urban finances done by the PBoC, 40% of households own two or more properties.  In other words, 40% of the urban households collect rents.  Most likely some of these landlords rented to migrant workers.  Looking at the number of households in urban populations, and using the 40% figure, we estimate that 85mm housing units are rented to migrant workers.  Because 1/3 of the long distance migrant workers have moved back home, we estimate that 1/3 of the 85mm housing units are potentially distressed or will become distressed.  This is 13% of urban housing units.

One scary development over the last five years has been the burgeoning credit creation via Negotiable Certificates of Deposit (NCD).  Essentially NCD’s are IOU’s with maturities under 12 months.  According to Ann Listerud and Maria Sinclair in their article, “The Snake that Ate Itself: Financialization of China’s Negotiable Certificates of Deposit”, larger banks funnel capital down to smaller banks by issuing these IOU’s that eventually flow down to higher yielding wealth management products.  Much of this money goes into construction and real estate.  Perhaps an early indication that the NCD market is faltering is the fact that cumulative issuance is declining recently.  (e.g. Bank A knows that Bank B is highly exposed to real estate.  Bank A will not buy Bank B’s NCD which results in less issuance while other NCD’s mature.)  Below is the weekly NCD issuance and cumulative issuance back to 2016: 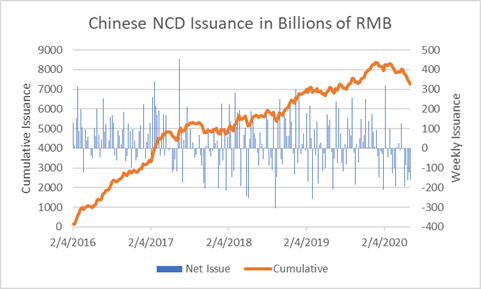 Notice that this market has gone from zero to over 8 trillion yuan in less than five years.  More telling is the 1 trillion yuan drop in net issuance in the last six months.  This could indicate stress in the real estate market.

The above development is alarming.  However, the Chinese government has been able to avert disaster due to it’s ample forex reserves, strong capital controls and ability to print yuan.  To illustrate, we can see Chinese M2 has maintained a higher trajectory from 2008 to 2019.  Now, in 2020, we are seeing once again an acceleration in M2:

Since Chinese savers are unable to get money out of the country, and real estate may be troubled until migrants return, could we see an inexplicable hard asset rally in China?  In other words, could Chinese savers buy commodities in an effort to store wealth?  Base metals and energy could be the best vehicles to achieve this goal as industrial metals are 60% off the 2007/2008 high:

As central banks and governments have disbursed bailouts across the globe, investors outside of China may have the same considerations.  Where do you put your money to avoid a debased currency?

The post Potential Fallout from COVID-19 In China appeared first on ValueWalk.