Note: These are coincident indexes constructed from state employment data. An explanation from the Philly Fed:

The coincident indexes combine four state-level indicators to summarize current economic conditions in a single statistic. The four state-level variables in each coincident index are nonfarm payroll employment, average hours worked in manufacturing by production workers, the unemployment rate, and wage and salary disbursements deflated by the consumer price index (U.S. city average). The trend for each state’s index is set to the trend of its gross domestic product (GDP), so long-term growth in the state’s index matches long-term growth in its GDP. 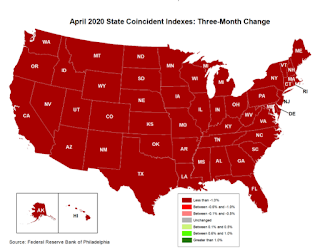 Here is a map of the three month change in the Philly Fed state coincident indicators. This map was all red during the worst of the great recession, and all or mostly green during most of the recent expansion.

The map is all red on a three month basis. 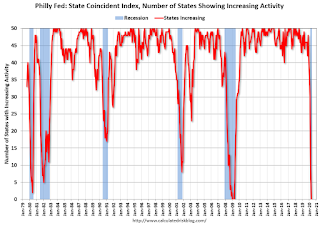 And here is a graph is of the number of states with one month increasing activity according to the Philly Fed. This graph includes states with minor increases (the Philly Fed lists as unchanged).

In all, zero states had increasing activity including states with minor increases.

In March, only 9 states had increasing activity.

A number of states had declining activity in January and February – prior to the COVID crisis.