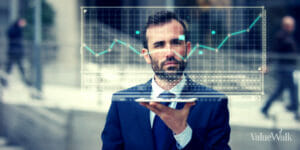 After releasing an earnings report that beat analyst estimates, Okta Inc (NASDAQ:OKTA) share value shot up significantly. While not all the data was impressive, share volume still cranked up to 20.30 million—more than six times the OTKA average daily volume—to help boost the value from $53.32 on Wed, Nov 30, to $65.94 by the following day.

While leveling out, OKTA stock broke higher again, several times, before closing out the day at $67.43. By December 2, OTKA stock settled down to around $65 (and trading volume has settled down as well).

While this is great news, the stock is still in the bottom third of its 52-week range (44.12 to 244.18). This means it has a lot of ground to make up, which might justify its more conservative Hold rating.

Earnings data in the Okta Inc Q3 fiscal year 2023 financial report shocked analysts who had expected bigger losses for the quarter. And not only are earnings improving, but Q3 revenue is also up 37%, year-over-year to $481.04 million beating the $465.37 million analysts expected. In addition, subscription revenue (which accounts for nearly 97% of the company’s total revenues) is up to $466 million.

More importantly, perhaps Okta’s earnings beat comes on the heels of a Fed announcement to temper rate hikes. This action typically results in a broad market push which is especially beneficial to stocks like Otka that have have been unprofitable.

Ratings Are Mixed Across the Sector

Any upward turn is quite significant for OTKA, right now, especially as it appears other companies in the same sector are experiencing similar downturns. Dropbox Inc. (NASDAQ:DBX), for example, also has a HOLD rating but their YTD is only down -4.52%.

In fact this particular stock has been making small-to-moderate gains the past few months. However, a P/E ratio of 25.54 means bigger changes could be on the way.

Qualtrix International (NASDAQ:XM) is actually down about as much as OKTA, respectively, at -70.37%. It is also down about the same percentage year-over-year. But while both Qualtrix and Okta are posting negative returns, XM is a moderate Buy; perhaps because it is also currently carrying a 76% upside, meaning a wealth of positive expectations looking forward.

Even Microsoft (NASDAQ:MSFT) carries only the slightly better moderate BUY rating, as it is also down -24.27% on the year so far. They have seen some improvement the past few months, but they are also struggling to stay in the upper regions of their 52-week range. Of course, both OKTA and XM are in the bottom third of that range.

All Things Considered, A Hold Rating Is Fair

The interesting thing about OKTA and MSFT here is that both were trading, at one point, at a daily volume perfectly in line with their average but OTKA has a HOLD rating while MSFT is a moderate BUY.

Sure, OKTA only briefly jumped to six times its daily average after its earnings beat and then settled back down but both DBX and XM, by comparison, consistently trade near their average volume, which is 2 to 3 million shares per day.

Another interesting trait, when comparing OKTA with MSFT, is that they both have a relatively high Price-to-Sales ratio (P/S) but carry different analyst ratings. While none of the four stocks mentioned in this comparison have a favorable P/S, DBX is closest to 2, with a value of 3.99. This is followed by XM (5.76), then OKTA (8.24), and finally MSFT (9.58).

Similarly, Microsoft’s 27.45 Price-to-Earnings ratio (P/E) is better suited to its moderate buy rating, especially when compared to Okta’s -11.43 P/E (paired with its more conservative Hold rating). Then again, Qualtrix also has a negative P/E (-5.38) and a moderate Buy rating—and Dropbox has an exceptional p/E of 25.54 but a HOLD rating—so there is certainly more to the story.

It is also comparably interesting that both XM and OKTA currently have negative earnings that are projected to grow. XM is closer to breakeven with projected growth in the range of -$1.67 to -$1.51, roughly four times better than of the -$5.12 to -$4.68 growth that OKTA is looking for, but XM has the slightly better moderate BUY rating.

All of this is to say that this sector is definitely being influenced by a convergence of variables. And, overall, the market size for digital identity solutions is still expected to grow by a Compound Annual Growth Rate (CAGR) of 20.4% by the end of the fiscal year 2022. In this case, OKTA had a good day and the Hold rating means it is definitely one to keep watching as it attempts to make good on this earnings beat.

Before you consider Okta, you’ll want to hear this.

MarketBeat keeps track of Wall Street’s top-rated and best performing research analysts and the stocks they recommend to their clients on a daily basis. MarketBeat has identified the five stocks that top analysts are quietly whispering to their clients to buy now before the broader market catches on… and Okta wasn’t on the list.

While Okta currently has a “Hold” rating among analysts, top-rated analysts believe these five stocks are better buys.