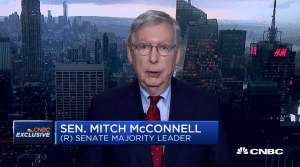 First on CNBC: CNBC Transcript: Senator Mitch McConnell speaks with CNBC’s Kayla Tausche on “Closing Bell” today about the GOP’s economic plan, why liability protection is a key to passing the latest proposal and the 2020 election.

Following is the unofficial transcript of a FIRST ON CNBC interview with Senator Mitch McConnell on CNBC’s “Closing Bell” (M-F, 3PM-5PM ET) today, Tuesday, July 28th. Following is a link to the video on CNBC.com:

All references must be sourced to CNBC.

KAYLA TAUSCHE: Well, thank you Wilf. And our thanks to the Senate Majority Leader for making some time for us to update us on the process of negotiations. Leader McConnell, tell us where things stand right now and when would be realistic to expect a bipartisan package to pass both chambers?

MITCH MCCONNELL: It’s hard to predict when we finally get together but what we laid out yesterday we met in the Senate Republican Majority is how we would deal with this phase of our overall rescue effort. Remember, we’ve already passed about $3 trillion worth of assistance. That’s added to the national debt. We now have a debt the size of our economy for the first time since World War Two. My view after the last bill passed in the March, April, period, we needed to push the pause button. See how we had already have worked out and then decide where to go from there. Well we’re, we’re here in July. We have advocated a trillion dollars. One third of what the House passed a couple of months ago. Highly targeted toward a few things that we think are absolutely critical to get the country back on its feet. Number one, liability protection. No one should be successfully sued, unless they were grossly negligent or engaged in intentional harm, who was dealing with this brand-new disease. That’s doctors, hospitals, nurses, universities, public schools, everyone involved in trying to work our way through that ought not to be subject to an epidemic of lawsuits on top of it. Beyond that, the theme of our package yesterday is kids in school, jobs, and healthcare.

KAYLA TAUSCHE: Leader McConnell, you mentioned yesterday that the economy remains fragile, when you decided to press the pause button, the virus is on it was on the decline. That is not the case now, and the Congressional Budget Office found that the $600 weekly unemployment supplement was able to keep household spending at pre pandemic levels can the economy afford for that to go away, and why worry about the deficit and the debt now, when there is still a public health crisis, potentially even worse than there was in March?

MITCH MCCONNELL: Well, unemployment is extremely important. But the way the bill is the previous bill is crafted, five out of six workers are actually making or staying at home, then going back to work. And remember, all of these folks are going to get another 1200 dollars in direct payment, under the Heels Act that we announced yesterday. So, all we’re saying is we don’t want to make it more profitable to stay home and to go back to work. That’s not what unemployment insurance is about. We think unemployment is extremely important at a time of high unemployment we want to continue that at their traditional level, and back the states up so they can afford to continue it for unnecessarily longer periods of time. But it also involves the principle of not paying your neighbor more to stay home than you’re making by going back to work.

KAYLA TAUSCHE: Part of the biggest divide between the Republicans and Democrats right now is on state and local government funding. Where is the fertile ground for compromise between zero dollars, as Republicans have proposed, and $1 trillion, as the Democrats have passed?

MITCH MCCONNELL: Yeah, actually, we haven’t proposed zero dollars. We’ve proposed 105 billion for education, which is 5 billion more than the House-passed bill a couple of months ago. Education is either the first item–

KAYLA TAUSCHE: But the apples to apples is –

MITCH MCCONNELL No, no. Let me answer. The two biggest item in every state budget are education and Medicaid. So, the 105 billion that we’re advocating for education is direct assistance to states and localities with either the top or the second most expensive item and every one of their budgets.

KAYLA TAUSCHE: And to be sure, Democrats have also backed educational spending and roughly that same ballpark. But what I’m talking about in that question was, specific funding for government budgets to make up for shortfalls. But I want to move on to talk about liability. Because Democrats have said that they will not bend to support liability protection. You just said a few moments ago this afternoon, there is zero chance that your conference passes something without this. Why is this a deal breaker for you?

MITCH MCCONNELL: Because there’s no chance of the country getting back to normal without it. No chance whatsoever. And so, as a majority leader I can tell you that no bill will pass the Senate that doesn’t have the liability protection in it. The Democrats need to understand for the country to get back to normal, we cannot have an epidemic of lawsuits on the heels of the pandemic that is not over yet that we’re trying to get through until we get to a vaccine, so that we can finally put this horrendous experience in the rearview mirror.

KAYLA TAUSCHE: Mr. Leader, with all due respect, the public opinion doesn’t necessarily support that. In a CNBC/Change Research poll we asked voters. If they supported protecting corporations against these lawsuits. Only 26% of respondents supported it and actually only half of Republicans supported it. And just yesterday Senator Lindsey Graham said this about the current package. She said I think if Mitch can get half the conference, that’d be quite an accomplishment. Why don’t more republicans support the package as it stands right now?

MITCH MCCONNELL: Republicans, almost to a person, support the liability reform. And that’s not about companies. It includes companies, but it’s about hospitals and doctors and nurses, and teachers, and universities and colleges, and K-12. This is not just liability protection for businesses, although they are included, along with everyone else, dealing with this brand-new disease. Unless you’re grossly negligent, or engage in intentional misbehavior, you’ll be covered. And it will be in a bill that passes the Senate.

MITCH MCCONNELL: Well, that’ll be subject to negotiation with the Democrats. But we’re not negotiating over liability protection. I’ll be responsible for putting the battle agreement on the floor. And as I said, it will have liability protection in it. So, we’re not negotiating with the democrats over that. There are a lot of other things we’re willing to discuss with them. We think a trillion dollars which three months ago, would seem like a lot of money is enough to address where we are today. They want to spend three times that much. That’s why we’re having discussions with them because we can’t make a law, without dealing with our Democratic colleagues.

KAYLA TAUSCHE: Mr. Leader, I want to switch gears here and talk about a couple other issues at hand, one being nominees. So, we learned just yesterday that there were a few Republican senators who have concerns about Judy Shelton, being on the Federal Reserve Board. What is the likelihood that you move forward with her nomination?

MITCH MCCONNELL: Well we’re taking a look at that nomination, and we’ll let you know when we are in a position to move forward with it.

KAYLA TAUSCHE: And on the election, Mr. Leader, what do you think the down ballot effect of the President’s leadership on coronavirus will be come November?

MITCH MCCONNELL: Well, I think each of us who are in office will be judged by how we handle it. And we put on a great job, I think, of delivering for our folks at home. I, for example, have visited over a roughly 20 hospitals in the last few months, talking about the assistance we’ve already provided through the CARES Act. It’s made a huge difference. Huge difference for hospitals. It’s also made a huge difference for small businesses. 48,000 small businesses in Kentucky have taken advantage of the popular PPP loans to the tune of $5.2 billion directly pumped down to the Commonwealth of Kentucky. So, I think all the incumbents who have been here and have been working on this legislation will be judged by how well a job they did for their particular states during this around this horrendous crisis.

KAYLA TAUSCHE: You very diplomatically talked about what Congress has done and that voters should judge Congress on those actions. But specifically, the poll numbers for Senate Republicans who are up for re-election this year have tracked those of President Trump in eroding in recent weeks. What are you telling those members about how closely they need to hue to the White House, whether they should be distancing themselves from the President?

MITCH MCCONNELL: Well, look, what we do know is that this is a very large class of Republicans. Because six years ago we took the majority. We have 23 members up. Our democratic opponents only have 12. So, we have of a lot of competitive races all over the country in different kinds of states. I’m confident when the smoke clears, we’ll still have a Republican majority in the United States Senate.

KAYLA TAUSCHE: Well we will leave our conversation there. We know you have some other important negotiations to get to, but we really appreciate your time this afternoon. Senate Majority Leader Mitch McConnell.

The post McConnell: Liability Protection Is A Key To The 2020 Election appeared first on ValueWalk.