From the MBA: Share of Mortgage Loans in Forbearance Decreases Slightly to 8.47%

The Mortgage Bankers Association’s (MBA) latest Forbearance and Call Volume Survey revealed that the total number of loans now in forbearance decreased by 1 basis point from 8.48% of servicers’ portfolio volume in the prior week to 8.47% as of June 21, 2020. According to MBA’s estimate, 4.2 million homeowners are in forbearance plans.
…
“The overall share of loans in forbearance declined for the second week in a row, led by the third straight drop in GSE loans,” said Mike Fratantoni, MBA’s Senior Vice President and Chief Economist. “Many borrowers initially received a three-month forbearance term, and as of June 21, 17 percent of loans in forbearance have now been extended, with the largest share of those being Ginnie Mae loans.”

Added Fratantoni, “The level of forbearance requests remains quite low as of mid-June. The rebound in the housing market is likely one of the factors that is providing confidence to both potential homebuyers and existing homeowners during these troubled times.”
emphasis added 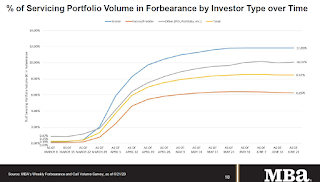 This graph shows the percent of portfolio in forbearance by investor type over time.  Most of the increase was in late March and early April.

The MBA notes: “Forbearance requests as a percent of servicing portfolio volume (#) decreased across all investor types: from 0.15% to 0.14%.”