From the MBA: Share of Mortgage Loans in Forbearance Decreases for First Time in Series to 8.48%

The Mortgage Bankers Association’s (MBA) latest Forbearance and Call Volume Survey revealed that the total number of loans now in forbearance decreased – for the first time since the survey’s inception in March – from 8.55% of servicers’ portfolio volume in the prior week to 8.48% as of June 14, 2020. According to MBA’s estimate, 4.2 million homeowners are now in forbearance plans – down from almost 4.3 million homeowners the prior week.
…
“The lower share of loans in forbearance was led by declines in GSE and portfolio and PLS loans, as more of those borrowers exited than entered a new forbearance plan,” said Mike Fratantoni, MBA’s Senior Vice President and Chief Economist. “Fewer homeowners in forbearance underscores the continued improvements in the job market, and provides another sign of the fundamental health of the housing market, which has rebounded considerably over the past several weeks.”

Added Fratantoni, “The big unknown with respect to this positive development is the extent to which it relies upon policy measures put in place to help families through this crisis, particularly the stimulus payments and enhanced unemployment insurance benefits that were key parts of the CARES Act. We expect to see further improvements in the weeks ahead given the drop in forbearance requests this week.”
emphasis added 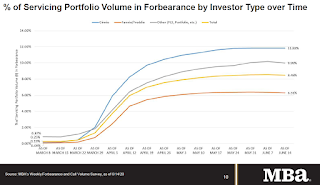 This graph shows the percent of portfolio in forbearance by investor type over time.  Most of the increase was in late March and early April.

The MBA notes: “Forbearance requests as a percent of servicing portfolio volume (#) increased across all investor types for the first time since the week of March 30-April 5: from 0.17% to 0.19%.”