From the MBA: Share of Mortgage Loans in Forbearance Decreases for Fifth Straight Week to 7.80%

The Mortgage Bankers Association’s (MBA) latest Forbearance and Call Volume Survey revealed that the total number of loans now in forbearance decreased by 38 basis points from 8.18% of servicers’ portfolio volume in the prior week to 7.80% as of July 12, 2020. According to MBA’s estimate, 3.9 million homeowners are in forbearance plans.
…
“The share of loans in forbearance dropped to its lowest level in over two months, driven by an increase in the pace of exits as more homeowners have been able to get back to work,” said Mike Fratantoni, MBA’s Senior Vice President and Chief Economist. “The decline in the forbearance share was broad based, with decreases for GSE, Ginnie Mae, and portfolio/PLS loans.”

Added Fratantoni, “Almost half of borrowers remaining in forbearance are now in an extension of the original term, while the remainder are in their initial forbearance plan. The pace of new forbearance requests remains quite low compared to earlier in the crisis, but we are watching carefully for any increases due to either the pick-up in COVID-19 cases or the cessation of enhanced unemployment insurance benefits at the end of this month.”
emphasis added 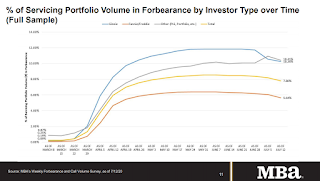 This graph shows the percent of portfolio in forbearance by investor type over time.  Most of the increase was in late March and early April, and has been trending down for the last five weeks.

The MBA notes: “Total weekly forbearance requests as a percent of servicing portfolio volume (#) remained flat relative to the prior week at 0.13%. “