Mortgage applications decreased 8.7 percent from one week earlier, according to data from the Mortgage Bankers Association’s (MBA) Weekly Mortgage Applications Survey for the week ending June 19, 2020.

Added Kan, “Even with high unemployment and economic uncertainty, the purchase market is strong. Activity has climbed above year-ago levels for five straight weeks and was 18 percent higher than a year ago last week. One factor that may potentially crimp growth in the months ahead is that the release of pent-up demand from earlier this spring is clashing with the tight supply of new and existing homes on the market. Additional housing inventory is needed to give buyers more options and to keep home prices from rising too fast.”
…
The average contract interest rate for 30-year fixed-rate mortgages with conforming loan balances ($510,400 or less) remained unchanged at 3.30 percent, with points increasing to 0.32 from 0.29 (including the origination fee) for 80 percent loan-to-value ratio (LTV) loans.
emphasis added 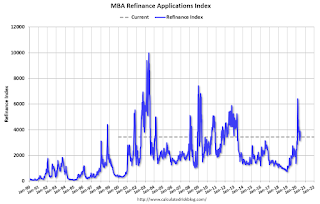 But the index is up signficantly from last year. 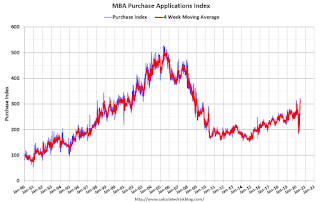 According to the MBA, purchase activity is up 18% year-over-year.