Total nonfarm payroll employment rose by 2.5 million in May, and the unemployment rate declined to 13.3 percent, the U.S. Bureau of Labor Statistics reported today. These improvements in the labor market reflected a limited resumption of economic activity that had been curtailed in March and April due to the coronavirus (COVID-19) pandemic and efforts to contain it. In May, employment rose sharply in leisure and hospitality, construction, education and health services, and retail trade. By contrast, employment in government continued to decline sharply.
…
The change in total nonfarm payroll employment for March was revised down by 492,000, from -881,000 to -1.4 million, and the change for April was revised down by 150,000, from -20.5 million to -20.7 million. With these revisions, employment in March and April combined was 642,000 lower than previously reported.
emphasis added 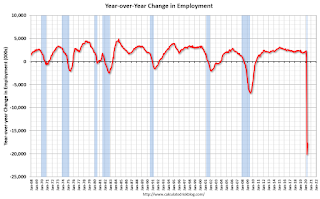 The first graph shows the year-over-year change in total non-farm employment since 1968.

Total payrolls increased by 2.5 million in May.

Payrolls for March and April were revised down 642 thousand combined. 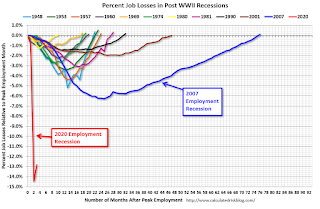 The second graph shows the job losses from the start of the employment recession, in percentage terms. 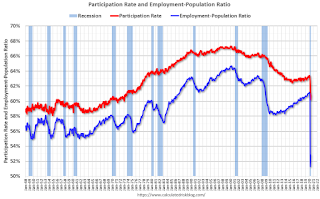 The Labor Force Participation Rate increased to 60.8% in May. This is the percentage of the working age population in the labor force. 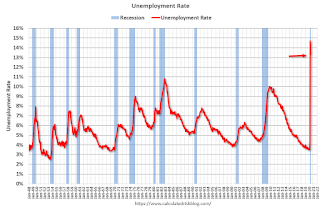 The unemployment rate decreased in May to 13.3%.

This was well above consensus expectations of 8,250,000 jobs lost, however March and April were revised down by 642,000 combined.

This was a surprising employment report since all other data pointed to more job losses in May.   I’ll have much more later …