There is systemic underproduction of electricity by solar assets in the US. This is largely driven by unreliable energy estimates and an industry wide bias towards aggressive assumptions.

As the solar industry matures, investors are becoming increasingly focused on emergent risks for the asset class such as merchant tail risk [1] while still placing a great deal of emphasis (rightfully so) on things like the credit quality of off takers. Yet there is an underappreciation, and an almost public dismissal, of a solar plant underperformance.

The variability in solar energy produced by panels is principally driven by weather (primarily solar resource uncertainty), but there is also annual degradation in the equipment, and variability arising from the quality of solar system engineering. To secure competitive financing for a solar project, the economic risk associated with production variability must be quantified. Every project will have a “P90” production value which means that in any given year, there is a 90% chance that production will be at least “X” amount (and a 10% chance that it will be less than the stated amount).

Recent analysis from kWh Analytics (which covers ~20% of the US operating fleet) reveals that periods in which solar assets are producing at, or below, the forecasted P90 level are occurring more than three times as frequently as the P90 definition implies. In other words, a year in which solar assets are producing less power than the P90 level are occurring close to every other year instead of once a decade. Further, a postmortem review finds that extreme downside scenarios, in essence production profiles that should only occur 1% of the time (P99) are occurring 1-in every-6 years; a far cry from the 1-in-100 definition.

This trend is not inconsequential. If we look at the operating profile for an average solar project (100MW capacity, $35/MWh PPA, ~$17/kW-year total OPEX), the economics can deteriorate quickly. If the average project performs at or below the official P90 production level, cash yields can drop by as much as 50% assuming the project has no debt financing. As articulated above, the probability of that happening in any single year appears to be closer to 40% rather than 10%. Over a 7-year period, the probability of a P90 event occurring is now ~96%.

We can extend our hypothetical project to credit as well. Current debt service coverage ratios for solar projects in the US are sized at ~1.25x P50. Meaning that the asset must generate operating cash that can cover interest expenses by 1.25x in a scenario in which it is generating 50% of its expected nameplate capacity. Assuming a bank extends a loan sized at 1.25x P50 (and there is no novel solar revenue ‘put’ insurance product), there is a 16% chance in any given year the project will hit a technical default simply due to underperformance. Over a 7-year period, there is a 70% chance that the loan will be in technical default due to a covenant breach in at least one of those years. 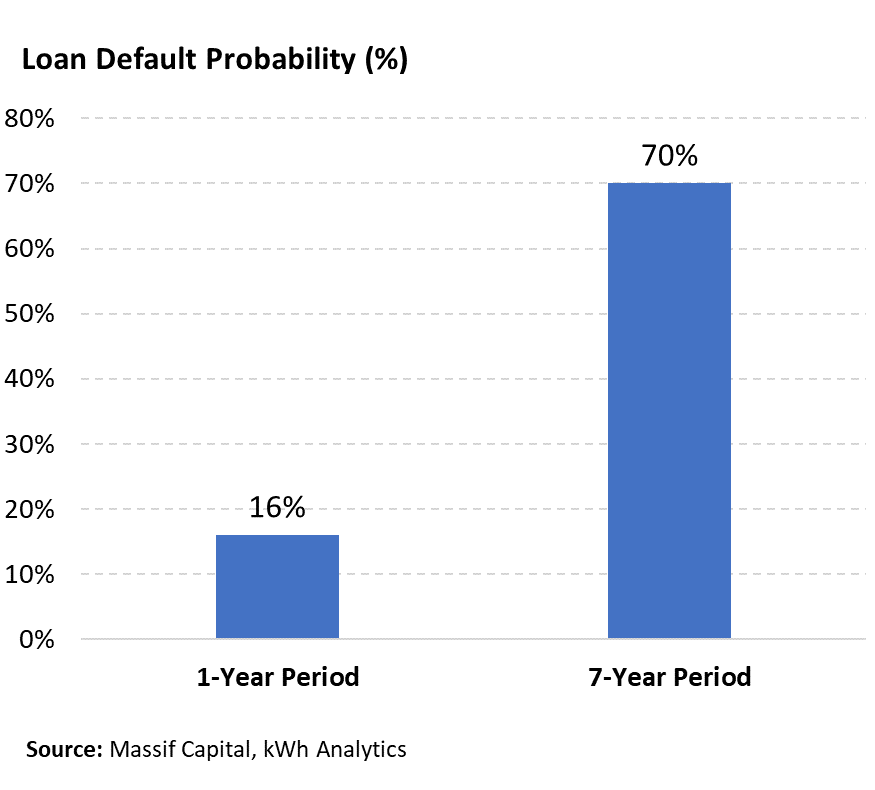 Relative to expectations, performance data are quite poor for US solar assets. Oil and gas investors are familiar with ‘type curves’ (a representative, average production rate of a producing well) and the importance of calibrating actual production data to approximate representations of outcomes. Solar investors would be well served to start paying more attention to annual production data when evaluating projects.

[1] A situation where the life of an asset (say a solar plant) is 35 years but the life of contracted cash flows from a PPA contract is only 20 years. There is still 15 years of revenue that’s going to be coming in after the PPA is gone and banks often do not want to take that risk.