Logos LP’s monthly commentary for the month of June 2020, titled, “The Beauty of Discomfort,” discussing their new stock idea Kingsoft Cloud Holdings Limited and the discomforts caused by the Coronavirus pandemic.

Stocks rallied on Friday after an unexpected surge in U.S. jobs raised hope that the economy is starting to recover from the government imposed lockdown.

The Nasdaq Composite became the first of the three major averages to climb back to an all-time high, advancing 2.0%. After tumbling as much as 25% earlier this year, the tech-heavy index is now 9.3% higher for 2020.

All of a sudden, the V-shaped recovery thesis is looking pretty convincing. Friday’s report appears to support the beginning of the labor market recovery and the unemployment rate is likely to fall further in June.

Quite frankly, it is astonishing just how wrong the “experts” got it (despite reports that a “misclassification error” made the unemployment rate look better than it is). Average expectations of more than 8 million jobs lost and instead, the largest amount of jobs created in any month EVER at 2.5 million. Friday’s nonfarm payrolls report is quite likely the biggest surprise relative to expectations that the market has EVER seen.

This is game changing and represents a completely different picture than the job market ravaged by the government mandated shutdown.

Jeff Cox puts forth a convincing description of the turnaround as a “three-headed” bull:

“First, government funding helped mitigate a wave of layoffs that otherwise would have come with stay-at-home orders related to the coronavirus. Then, states and cities reopened more quickly than anticipated. Finally, the U.S. economy, which seemed to wobble even before the shutdown, showed an uncanny sense of resilience that gave still another boost to an uncanny Wall Street rally that seemed to defy fundamentals.”

Was this data surprise a completely unexpected outcome? Not really. The stock market has been telling us that the U.S. was rebounding more quickly from the pandemic than anyone expected. But instead of being optimistic and listening to the market, many decried “the gap between Wall Street and Main Street,” and focused instead on the gloomy forecasts about how much of this job loss researchers think will be permanent and how we’re already in another Great Depression.

Time will tell as there is still a lot of work to be done. Job gains represent just a fraction of those lost, yet American balance sheets are also looking healthy. The personal savings rate hit a historic 33% in April. This rate – which indicates how much people save as a percentage of their disposable income – is by far the highest since the department started tracking in the 1960s.

The swiftness and severity of a U.S. economic recovery hinges on whether consumers continue to stockpile cash or start to spend again. Our thought is that a 2 month recession shouldn’t be enough to scare consumers into keeping their wallets shut. We see pent up “revenge” spending to be likely, and already see signs of this given the incredible velocity of retail investor buying in the financial markets.

Kelly Evans reminds us that “after all, guess who has been buying this market since the darkest days of the pandemic? Retail investors. The general public. Here’s Axios, on March 30: “As traders around the globe have frantically unloaded positions in recent weeks, so-called mom and pop retail investors have kept level heads and not sold out of stocks.” “Wall Street” was panicking and selling the rally. Everyday Americans were buying.”

We aren’t out of the woods yet and thus, taking victory laps around the bears is certainly premature. Nevertheless, this incredible rally, which is gradually being confirmed by the economic data, should remind us to listen to “experts” with a healthy degree of scepticism.

As Nick Maggiulli has recently stated: “No one has a monopoly on knowledge. No one is infallible. Not the analysts at the top tier banks. Not the Nobel Laureates. Not even the great Warren Buffett. Yet, we create this mythology around them that says otherwise…the divide between you and them is smaller than you think.”

With each passing day, the March lows appear to have in fact been a “historic” buying opportunity. What the market appears to be reminding us dovetails Ramp’s statement above quite nicely which is to remain flexible in our convictions and to do our own homework. To remember that our desire to be right should never trump our goal of generating investment returns. We won’t be right 100% of the time, but with a flexible data driven approach and a clear investment strategy, ANYONE has a shot at generating market beating returns over time.

Kingsoft Cloud Holdings Limited (KC): China’s largest independent cloud provider and 3rd largest cloud service. The Company saw 64% Q1 growth YoY and guided 60-65% growth for FY 20. Expected growth for next year is 60%. Currently, they are building and running data centres for phase 1 “land and grab” in China’s enterprise cloud market, which grew from 2% IT penetration in 2015 to 15% for 2020. Billings have been growing at 115% CAGR and will continue at a high clip given the early stage of China’s cloud market (~30% market growth, 3-4x the size of the US market). Competition from AliBaba and Tencent will remain and new players will eventually enter the market. However, the main drivers for Kingsoft include: 1. Neutrality for video and gaming; 2. Data risk management for the enterprise in key verticals like healthcare and financial services; and 3. Product innovation and development of scalable solutions for enterprise IT needs. At 3.8x next year’s revenues, we think that the valuation is very reasonable given the company’s future cash flows and we expect gross margins to ramp up over the next decade.

Membership will initially be limited to 1000 members. Please subscribe here.

To say that 2020 has been a challenge would be an understatement. COVID-19’s tragic loss of life, government imposed lockdowns, natural disasters, economic pain, market turmoil, trade wars, divisive rhetoric, the failure of expertise, unparalleled uncertainty and now, civil unrest. For even the most disciplined stoic, 2020 has been a year of discomfort.

Nevertheless, 2020 can be viewed differently. It can be viewed as an opportunity to observe and be reminded how beautiful discomfort can be.

How so? Well as a starting point, humans are wired to seek comfort. As babies, we cry when we are hungry, lonely, bored and uncomfortable, signalling our distress. Our parents then cater to us to alleviate our discomfort. As we grow into children, the pattern continues. Our parents protect us from turmoil at school or on the playground and in organized sports the objective becomes to make children feel as comfortable as possible. Participation is rewarded and competition and outperformance is frowned upon. Standout talent is chastised and even penalized for superiority for fear of its effects on those less gifted.

Moving on to high school and university, our teachers and parents continue to be wary of exposing us to any discomfort. Materials are censored as it may upset certain students, provocative statements and debates are avoided, grades are manipulated to avoid disappointment and all matters of tardiness are excused.

As Amanda Lang in her book The Beauty of Discomfort has observed: “schools are now working so hard to avoid giving offence that they cannot teach one of the most important lessons of young adulthood: how not to take offence. Learning to cope with discomfort, disagreement, aggression and criticism (even wholly unprovoked aggression and criticism) can be one of the greatest accomplishments of a child’s early school years.”

Why should we be concerned about the proliferation of this “discomfort avoidance” trend in our societies?

People who get comfortable occupying the discomfort zone learn that the habit of making an effort as well as the willingness to make mistakes is the price for positive change, growth and ultimately, success (however you define it).

In contrast, watching the events of 2020 unfold appears to suggest that our culture of “discomfort avoidance” may be failing us.

Observing the 2020 fallout puts into perspective the reasons why some people drive change while others are blindsided by it. Why are some able to adapt and thrive when change is forced upon them while others stay stuck in the mud or are run over by it?

The variance in outcomes can be better understood when discomfort is reframed as beautiful. Change isn’t comfortable, yet those who can change and thereby innovate, have the best chance of succeeding. Studies show time and time again, that successful people are those that don’t merely tolerate discomfort, they embrace it. It is their comfort with discomfort that makes them so good at change.

Discomfort is conceptualized as a positive catalyst rather than a negative. Thus, if we look at 2020 through this lens, we can look at it as an incredible opportunity to lead us to positive change and growth. Yet to change something as large as a country, or its institutions, we need to start by changing ourselves and the way we each experience discomfort.

At present, it would appear that the discomforts of 2020 have brought us to a crossroads. It is a potential turning point in the way we as individuals and as a society, experience discomfort.

We can either continue down the path that we appear to be on – one which views discomfort as something to be avoided at all costs, ultimately leading to self-defeating and self-destructive behaviour (i.e. seeking instant gratification, ascribing blame to others, holding tightly to old convictions, avoiding truth, avoiding personal responsibility, shaming, envy, violence and destruction) – or we can choose to view discomfort as something to be confronted, studied and used to push us towards positive change and growth.

What approach to the discomfort of 2020 will we choose? The future of our society may depend on the answer. Will we look to its beauty or continue to view it as a beast? As much as we may want to defer that choice to someone else, the decision ultimately lies nowhere else but within each and every one of us…

Charts of the Month 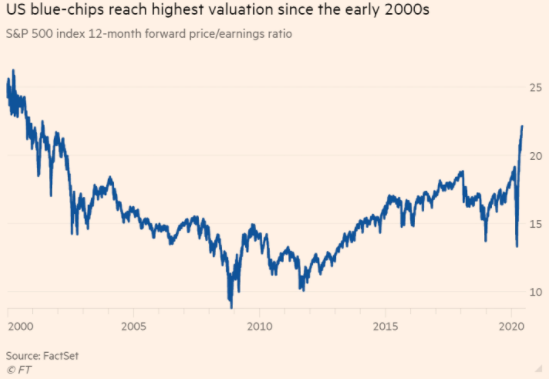 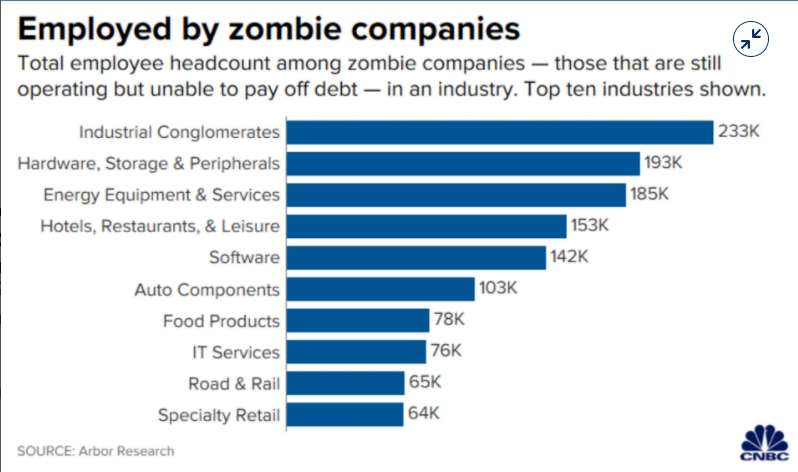 Thought of the Month

““I will eliminate hatred, envy, jealousy, selfishness, and cynicism, by developing love for all humanity, because I know that a negative attitude toward others can never bring me success. I will cause others to believe in me, because I will believe in them, and in myself.” ― Napoleon Hill

Articles and Ideas of Interest

Our best wishes for a month filled with courage and contentment,

The post Logos LP June 2020: The Beauty of Discomfort appeared first on ValueWalk.