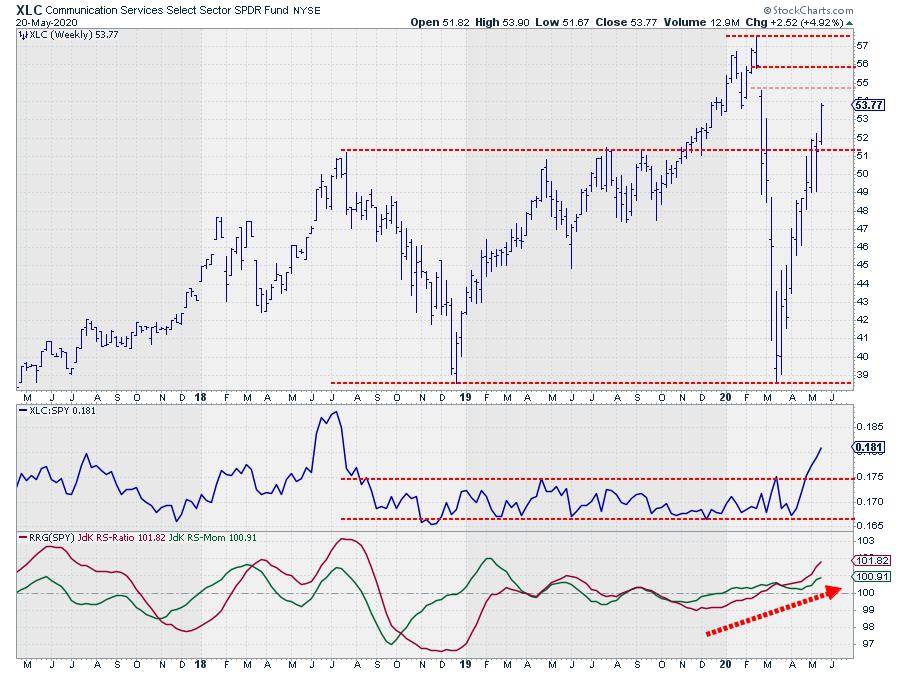 Communication Services seem to be in high demand looking at the price chart for XLC.

After the March crash, or was it “just a dip” with hindsight, XLC rapidly bounced back with a vengeance.

I have annotated the chart above with some horizontal support and resistance levels and want to share a few technical observations on those.

First of all from the peak down there’s a gap area between $54.60-$55.80, in the week when that gap was formed the horizontal, then, support level near $51 was broken and the next week, despite a short peek back above $51, that break was confirmed.

The horizontal support level around $47 got slashed as if it did not even exist. Price went straight through. Both these levels have multiple historical touch-points as peaks and troughs which means that people have been acting, buying or selling, in those areas. Not this time.

If we switch to relative strength we see an important move in the last few weeks. Despite the big price swings both up and down in 2019, relative strength against the S&P 500 was contained within the boundaries of a trading range. That has now come to an end.

For this week and following I am watching resistance offered by the gap-area between and after that the high at $57.60. Given the steepness of the rally setbacks have to be on our radar to watch. Support is expected just above $51 at that horizontal barrier. Let’s wait and see if the market will respect that level when market-conditions are, at least a little bit, more normal. If it does that could be a good correction level for (re-)entry.