It is likely the results of this survey were significantly distorted by the pandemic.  See note from Census below.

This report is frequently mentioned by analysts and the media to track household formation, the homeownership rate, and the homeowner and rental vacancy rates.  However, there are serious questions about the accuracy of this survey.

This survey might show the trend, but I wouldn’t rely on the absolute numbers. he Census Bureau is investigating the differences between the HVS, ACS and decennial Census, and analysts probably shouldn’t use the HVS to estimate the excess vacant supply or household formation, or rely on the homeownership rate, except as a guide to the trend. 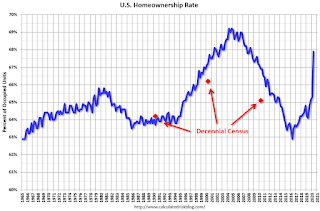 I’d put more weight on the decennial Census numbers.   It is likely the results in Q2 were distorted by the pandemic. 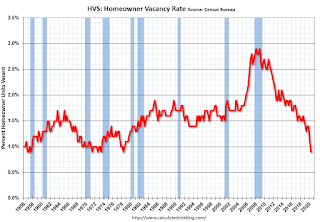 The HVS homeowner vacancy declined to 0.9%.

Once again – this probably shows the general trend, but I wouldn’t rely on the absolute numbers.

As a result of the coronavirus pandemic (COVID-19), data collection operations for the CPS/HVS were affected during the second quarter of 2020. In-person interviews were suspended for the duration of the second quarter and replaced with telephone interview attempts when contact information was available. If the Field Representative was unable to get information on the sample unit, the unit was made a Type A non interview (no one home, refusal, etc). 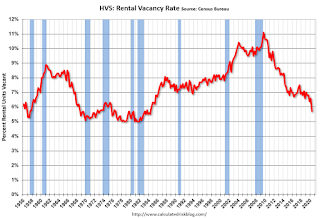 The rental vacancy rate decreased to 5.7% in Q1.

The quarterly HVS is the most timely survey on households, but there are many questions about the accuracy of this survey.