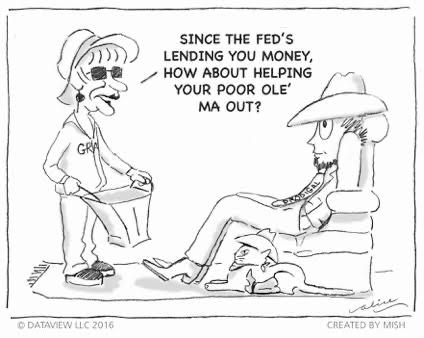 Are you wondering how bonds, gold, volatility, the S&P 500 and NASDAQ can all run up on the same day? Plus, Beyond Meat, Amazon, cannabis, Tesla and Oil and Gas Exploration partied like they boarded SpaceX!

Well, think of it this way. Stanley Druckenmiller manned up and admitted he was completely humbled by this market rally. So, don’t feel so bad.

And that is why we have a Family. An Economic Modern Family.

We have the guy who is so predictable, his moniker so aptly matches his price behavior. And we are happy for him.

On Friday, I wrote for the daily: “The one [possible topping pattern] I am interested in is the one that could be setting up in Regional Banks (KRE). That gapped up, failed to clear the 200-DMA, then closed near the intraday lows. I like KRE for the last couple of years as an early indicator of impending weakness in the market all around.”

This is why Regional Banks are a great voice of reason.

Above are 2 views of KRE. The weekly chart shows that it cleared the resistance that going back from the 2018 lows. That makes 44.40 an area of support. The daily chart shows the gap up from last Friday. On Monday, KRE closed higher again, rising by 3%.

The Fed is challenging regional banks as the new Prodigal Son. They have something KRE doesn’t have – a printing press.

Today, they announced that they are easing the terms for its Main Street Lending Program. Free money, money everywhere, with 16% of the labor force unemployed. How could Druckenmiller have guessed the Fed would still be talking about the potential of negative rates even as SPY wipes out all the losses since COVID-19?

Whether it is the FED or our real Prodigal Son, something has to give. KRE could gap higher and clear the 200-DMA. And it could easily gap lower and confirm an exhaustion gap. After that, who comes home begging for forgiveness? Maybe it’ll be the new generation of totally inexperienced Robinhood traders, who, unlike Druckenmiller, have yet to swallow humble pie.