May 19, 2020 admin
From the Census Bureau: Permits, Starts and Completions 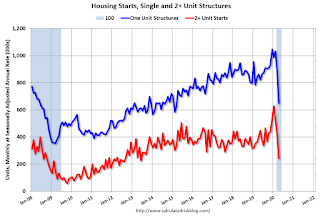 Multi-family is volatile month-to-month, and  had been mostly moving sideways the last several years.

Single-family starts (blue) decreased in April, and were down 24.8% year-over-year. 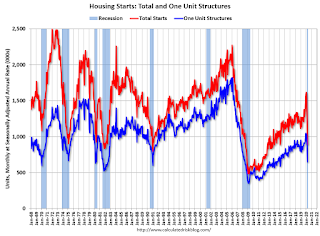 The second graph shows total and single unit starts since 1968.

The second graph shows the huge collapse following the housing bubble, and then eventual recovery (but still historically low).

Total housing starts in April were below expectations, however starts in March were revised up.

Residential construction is considered an essential business, and held up better than some other sectors of the economy, but was still negatively impacted by COVID-19.