June 4, 2020 admin
From HotelNewsNow.com: STR: US hotel results for week ending 30 May

STR data ending with 30 May showed another small rise from previous weeks in U.S. hotel performance. Year-over-year declines remained significant although not as severe as the levels recorded previously.

“A seventh consecutive week of higher demand and occupancy was highlighted by three submarkets actually showing positive year-over-year occupancy comparisons for the weekend,” said Jan Freitag, STR’s senior VP of lodging insights. “Two of those areas, Titusville/Cocoa Beach and Melbourne/Palm Bay, likely received a boosted from the SpaceX launch activities on Saturday. The third submarket, Corpus Christi, further supports previous analysis that there is demand ready to return, but for now, it is more visible from leisure sources and in destinations that are set up well for drive-to business.

“Because the situation intensified more toward the end of the week, and because there has not been a great deal of demand in downtown areas because of the pandemic, there wasn’t a noticeable impact from protests and the unrest occurring in major cities. That is something to monitor in our next dataset and perhaps beyond depending on how the situation plays out.”
emphasis added 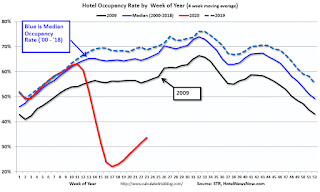