“Occupancy was up another couple percentage points from last week, marking the 10th consecutive week of such an increase,” said Jan Freitag, STR’s senior VP of lodging insights. “Demand continues to be pushed upward by drive-to spots and the destinations with outdoor offerings such as beaches. For the week, 10 submarkets showed occupancy above 70%, led by Panama City (88.7%), where occupancy was just 0.7% lower than the comparable week in 2019.”
emphasis added 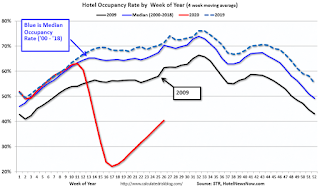 Usually hotel occupancy starts to pick up seasonally in early June. So even though the occupancy rate was up slightly compared to last week, the year-over-year decline was only slightly improved this week compared to the previous three weeks  (41.8% decline vs 43.4% last week, 45.3% two weeks ago, and 43.2% decline three weeks ago).

The improvement appears related mostly to leisure travel as opposed to business travel.