U.S. hotel performance data for the week ending 4 July showed a slight decline in occupancy from the previous week, according to STR.

Occupancy had risen in week-to-week comparisons for 11 straight weeks since mid-April.

“Demand came in 67,000 rooms lower than the previous week, and beyond that, July 1 was a reopening day for a lot of hotels, further impacting the occupancy equation,” said Jan Freitag, STR’s senior VP of lodging insights. “A rise in COVID-19 cases has led to states pausing or even rolling back some of their reopenings. Beaches have been a big demand driver for hotels, but with many beaches closed ahead of the July 4 holiday, all but two markets in Florida showed lower occupancy than the previous week. Growing concern around this latest spike in the pandemic has further implications for leisure and business demand alike.” emphasis added 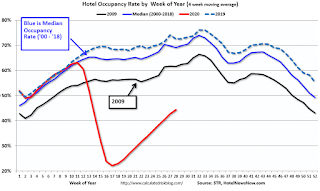