The net worth of households and nonprofits fell to $110.8 trillion during the first quarter of 2020. The value of directly and indirectly held corporate equities decreased $7.8 trillion and the value of real estate increased $0.4 trillion. 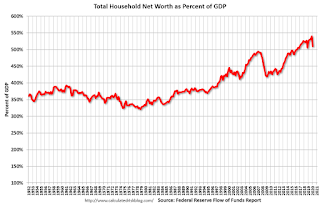 Net Worth as a percent of GDP decreased in Q1. 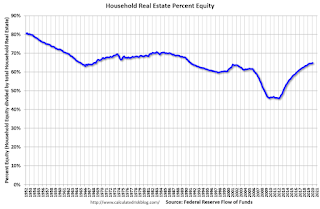 Household percent equity (as measured by the Fed) collapsed when house prices fell sharply in 2007 and 2008.

Note: about 30.3% of owner occupied households had no mortgage debt as of April 2010. So the approximately 50+ million households with mortgages have less than 64.8% equity – and about 1.82 million homeowners still have negative equity. 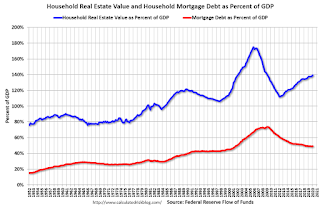 The third graph shows household real estate assets and mortgage debt as a percent of GDP.

The value of real estate, as a percent of GDP, increased in Q1, and is above the average of the last 30 years (excluding bubble).