Net Income Increased Quarter Over Quarter and Year Over Year: Quarterly net income totaled $71.7 billion in third quarter 2022, an increase of $7.3 billion (11.3 percent) from the second quarter.
…
Asset Quality Metrics Were Favorable Overall Despite Growth in Early Delinquencies: Loans that were 90 days or more past due or in nonaccrual status (i.e., noncurrent loans) continued to decline and the noncurrent rate was down 3 basis points to 0.72 percent from second quarter 2022. The noncurrent rate for total loans is at the lowest level since second quarter 2006. Total net charge-offs increased 6 basis points from a year ago to 0.26 percent, driven by higher credit card and auto loan net charge offs. Early delinquencies (i.e., loans past due 30-89 days) increased 3 basis points from last quarter and 7 basis points from the year-ago quarter to 0.51 percent. Both the quarterly and annual increases were driven by an increase in past due credit cards, C&I, and auto loans.
emphasis added 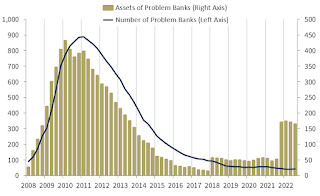 The FDIC reported the number of problem banks increased to 42.

The number of banks on the FDIC’s “Problem Bank List” increased by two from second quarter to 42. Total assets of problem banks declined $5.7 billion to $163.8 billion.7 No banks failed in the third quarter.

This graph from the FDIC shows the number of problem banks and assets at problem institutions.