The bears have been in charge of the market for months now, going back to the beginning of January when the S&P topped out at 4818, just as our Chief Market Strategist Tom Bowley warned our members that a market storm was about to begin. Since then, the bulls had failed to gain the upper hand. Finally, when the S&P touched 3636 last Friday, the bulls put their collective feet down and went to work, with the S&P gaining 7.5% since Friday’s low. 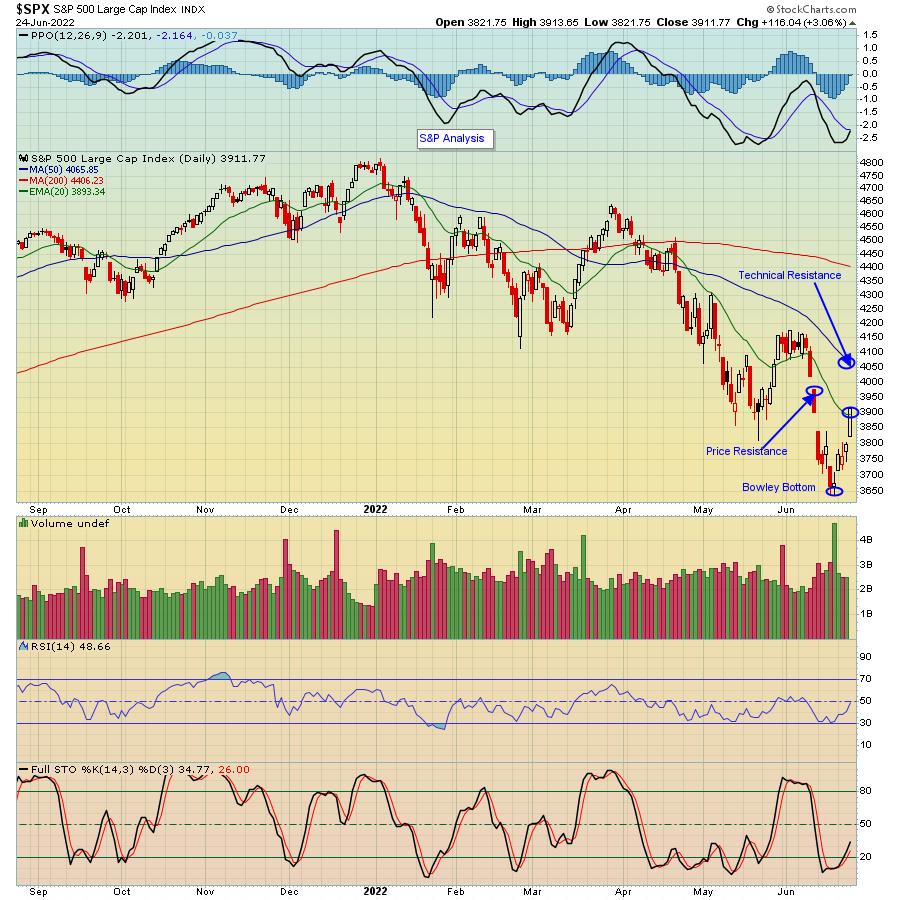 That 7.5% pop was most welcomed, as the S&P had lost almost 25% since that January high. And, in fact, when the S&P hit that low of 3636, Tom declared that the “Bowley Bottom” was in, citing factors such as a very high put/call ratio (most bets on the short side), a consistently high VIX (tons of fear) and the realization that Wall Street had finally turned its attention to beaten-down, high-growth stocks.

Of course, we can’t be certain if a final bottom is in place. However, just this past week, we saw yields on government bonds fall sharply, along with oil and other commodity prices that have been pegged to high inflation, with all combined giving the bulls some confidence that the worst of the selling has already taken place.

What might be next? First, as you can see in the chart above, the S&P closed back above its 20-day moving average of 3893, which was the first key level of technical resistance. The next level of price resistance is 3974, while the next key level of technical resistance is at the 50-day, currently at 4065. And we’ll want to pay attention in case the S&P falls back below that 20-day moving average of 3893 which could indicate some profit-taking could be in store.

You’ll hear a lot of analysis next week questioning whether or not this past week was a bear market rally or the beginning of a new bull run. But, as Tom pointed out to our members this past week, we likely have seen the bottom and could see traders start to move away from “sell any rallies” to “buy the dips.” In the meantime, if you would like to begin to receive our FREE newsletter, the EB Digest (EBD), just click here and you will get insightful, useful market-related information from Tom every M, W and F.