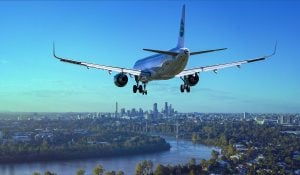 A 4% jump in Delta Air Lines’s (NYSE:DAL) shares on a day when the S&P 500 index sank to fresh lows is a good indication of what they might do over the next few months. The catalyst for the move higher was the company’s Q3 earnings report, which was released just before the bell rang to start Thursday’s session.

Revenue was up a solid 53% on the year and ahead of the consensus, while bottom line earnings were marginally short of the $1.53 analysts were expecting. All in all, positive headline numbers.

But the deeper you went into the report, the better it got. Delta is now forecasting EPS for Q4 to be between $1 to $1.25, well ahead of the consensus for $0.80. Given the tough 18 months their shares have logged, there’s a growing argument that we could be on the verge of a major recovery rally.

Since their post-pandemic move higher ran out of steam back in March of last year, shares have trended lower some 45%. Though still well above the lows of May 2020, this consistent lack of demand for shares is at odds with the overall bounce back in air traffic numbers. There’s only one real culprit to point the finger at here, inflation.

Squeezed On Both Sides

Like with pretty much every other industry and stock out there, inflation has made its presence felt in the past year, and not in a good way. For airlines specifically, it squeezes them from both sides.

Falling discretionary spending by consumers means less demand for vacation flights, while the rising interest rates being brought in to fight inflation mean higher borrowing costs for the business.

With this context, it’s understandable that the bears have been in control. But it’s also fair to at least wonder if we might be going through the worst of it right now. Many analysts expect inflation to peak in the first half of next year, so you have to think that the worst-case scenario is just about priced into shares or is close to it.

Any upside surprise, be it macroeconomic or company-specific like with the fresh forecast for Q4’s EPS, could act as a spark to dry tinder. Indeed, Glen Hauenstein, Delta’s president, struck a bullish tone in this regard with yesterday’s report.

He told investors that “we reached a major milestone this quarter, with adjusted revenue 3 percent higher and unit revenues up 23 percent compared to 2019, marking the highest revenue and unit revenue quarter in Delta’s history.

Our results reflect the strength of our brand and diverse revenue streams, with another quarter of record co-brand remuneration and continued premium product outperformance. With corporate travel improving and robust domestic and international demand, we expect December quarter revenue to be up 5 to 9 percent compared to December quarter 2019.”

Yet for all that, Delta shares are still only trading at 2013 levels. From a technical perspective, however, it’s looking like they’re trying to put in a low around the $29-30 mark. Save for a few intra-day transgressions, this level has been strongly defended since March of this year and there’s a decent line of support for tempted investors to start working some entries around.

These same investors will appreciate how Delta is performing against its peers as well. Of all the majors, including United Airlines (NASDAQ:UAL), American Airlines (NASDAQ:AAL), and Southwest Airlines (NYSE:LUV), Delta has traded the strongest over the past 12 weeks.

While still down 4% from where it started in August, the others are down 6%, 9% and 15% respectively. There’s sure to be some more turbulence yet for airline shares this year, and Delta will be no exception. But its shares look more likely to go higher from here than lower, and if you’re an optimist when it comes to inflation, it could be time to start backing up the truck.

Should you invest $1,000 in Delta Air Lines right now?

Before you consider Delta Air Lines, you’ll want to hear this.

MarketBeat keeps track of Wall Street’s top-rated and best performing research analysts and the stocks they recommend to their clients on a daily basis. MarketBeat has identified the five stocks that top analysts are quietly whispering to their clients to buy now before the broader market catches on… and Delta Air Lines wasn’t on the list.