Other measures of manufacturing activity also pointed to a rebound in growth this month. The new orders index advanced 34 points to 2.9, its first positive reading in four months, with nearly a third of manufacturers noting an increase in orders. The growth rate of orders index pushed up 25 points but remained negative at -5.8. The capacity utilization and shipments indexes also returned to positive territory.

Perceptions of broader business conditions were mixed in June. The general business activity index surged 43 points but stayed negative at -6.1. The company outlook index climbed back into positive territory, from -34.6 to 2.7, with 29 percent of manufacturers noting improved outlooks, up from 12 percent last month. The index measuring uncertainty regarding companies’ outlooks retreated notably again to 9.1—its lowest reading since January. The positive reading still indicates increased uncertainty.

This was the last of the regional Fed surveys for June.

Here is a graph comparing the regional Fed surveys and the ISM manufacturing index: 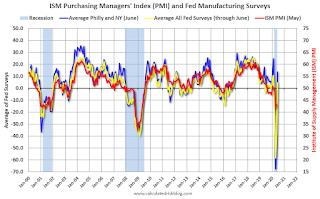 Note that these are diffusion indexes, so returning to 0 (or 50 for ISM) means activity is not declining further (it does not mean that activity is back to pre-crisis levels).