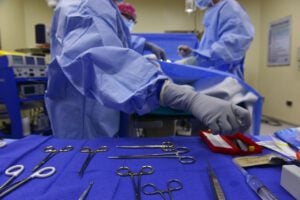 There is no surety that Congress will approve another stimulus package, but that is not stopping people or groups from demanding more funds for themselves. One such group that is rightfully asking Congress to provide more financial assistance or coronavirus stimulus checks for themselves are the healthcare workers.

Healthcare workers have urged Congress to approve more financial assistance for them, as well as for others working on the frontlines. Several healthcare workers gathered outside St. Patrick’s Hospital earlier this month asking the Senate to pass the HEROES Act (Health Economic Recovery Omnibus Emergency Solutions).

In May, the House passed the HEROES Act costing over $3 trillion. The Democrats-backed proposal promises funds for many healthcare programs, including hazard pay for healthcare workers, who were not covered under previous stimulus packages. A $200 billion “Heroes Fund” promised care providers $13 per hour above their regular pay.

On the other hand, the HEALS Act did not include hazard pay for healthcare workers. The HEALS Act (Health, Economic Assistance, Liability Protection and Schools), costing about $1 trillion, was introduced in late July. It was the first proposal put forth by Senate Republicans for the second stimulus package. In September, the Senate Republicans came up with a so-called skinny bill costing about $500 billion.

Healthcare workers say that more financial assistance or a coronavirus stimulus check is not about more income, rather the recognition of the work they are doing during the pandemic. Further, they argue that nursing homes are seeing worker turnover during the pandemic, and thus, they are understaffed, resulting in each worker handling up to 20 patients a day.

Moreover, the situation at the start of the pandemic was disappointing as the personal protective equipment were in short supply. There have been instances when healthcare workers had to reuse N95 masks and use delicatessen-grade gloves. Healthcare workers believe the HEROES Act would improve the domestic production of the personal protection equipment.

Will there be another relief package?

It isn’t clear if the updated HEROES Act, which costs about $2.2 trillion, has the same level of funding for the healthcare workers. Moreover, it isn’t exactly clear how much President Donald Trump’s offer of $1.8 trillion includes for healthcare workers.

Even though Trump has raised the offer from $1.6 trillion to $1.8 trillion, there is no deal yet. House Speaker Nancy Pelosi rejected the $1.8 trillion offer, calling it inadequate to meet the needs of Americans. She is asking for a stimulus package of $2.2 trillion.

Though a deal is unlikely before the election, the negotiations haven’t been called off yet. Lawmakers, however, are currently busy with filling the vacant Supreme Court seat. Trump, on Monday, did urge the lawmakers to conclude the Supreme Court work quickly so that they can focus on the stimulus package.