1) Existing home sales are counted at the close of escrow, so this report is mostly for contracts signed in February and March. Some analysts think the April report will be the bottom for existing home sales – since purchase applications have increased recently – but my guess is that few contracts were signed in April, so reported sales in May (and maybe even June) will probably be lower.

2) Inventory is very low, and was down 19.7% year-over-year (YoY) in April. Inventory will probably stay fairly low as people wait to list their homes – and do not want strangers in their house.   This is the lowest level of inventory for April since at least the early 1990s. 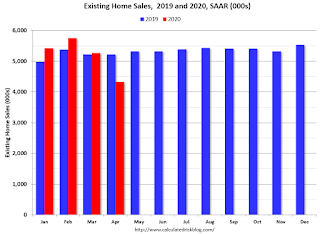 Note that existing home sales picked up somewhat in the second half of 2019 as interest rates declined.

Even with weak sales in April, sales to date are only down about 0.8% compared to the same period in 2019. 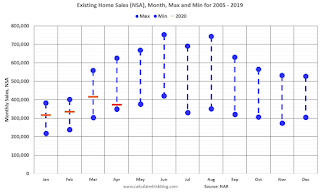 The second graph shows existing home sales Not Seasonally Adjusted (NSA) by month (Red dashes are 2020), and the minimum and maximum for 2005 through 2019.