Led by improvements in production- and employment-related indicators, the Chicago Fed National Activity Index (CFNAI) increased to +4.11 in June from +3.50 in May. Three of the four broad categories of indicators used to construct the index made positive contributions in June, and two of the four categories increased from May. The index’s three-month moving average, CFNAI-MA3, moved up to –3.49 in June from –6.36 in May.
emphasis added 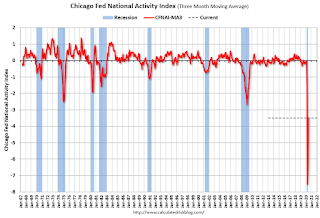 According to the Chicago Fed:

The index is a weighted average of 85 indicators of growth in national economic activity drawn from four broad categories of data: 1) production and income; 2) employment, unemployment, and hours; 3) personal consumption and housing; and 4) sales, orders, and inventories.
…
A zero value for the monthly index has been associated with the national economy expanding at its historical trend (average) rate of growth; negative values with below-average growth (in standard deviation units); and positive values with above-average growth.