July 28, 2020 admin
S&P/Case-Shiller released the monthly Home Price Indices for May (“May” is a 3 month average of March, April and May prices).

“May’s housing price data were stable,” says Craig J. Lazzara, Managing Director and Global Head of Index Investment Strategy at S&P Dow Jones Indices. “The National Composite Index rose by 4.5% in May 2020, with comparable growth in the 10- and 20-City Composites (up 3.1% and 3.7%, respectively). In contrast with the past eight months, May’s gains were less than April’s. Although prices increased in May, in other words, they did so at a decelerating rate. We observed an analogous development at the city level: prices increased in all 19 cities for which we have data, but accelerated in only 3 of them (in contrast with 12 cities last month and 18 the month before that).

“More data will obviously be required in order to know whether May’s report represents a reversal of the previous path of accelerating prices or merely a slight deviation from an otherwise intact trend. Even if prices continue to decelerate, that is quite different from an environment in which prices actually decline.
emphasis added 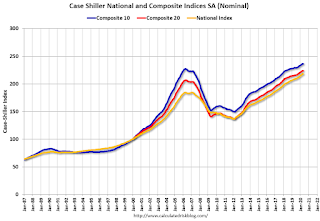 The Composite 10 index is up 4.1% from the bubble peak, and unchanged in May (SA) from April.

The Composite 20 index is 8.3% above the bubble peak, and unchanged (SA) in May. 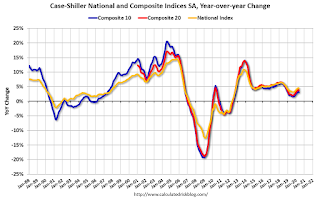 The National index SA is up 4.5% year-over-year.

Note: According to the data, prices increased in 13 of 20 cities month-over-month seasonally adjusted.