S&P/Case-Shiller released the monthly Home Price Indices for March (“March” is a 3 month average of January, February and March prices).

Note: Case-Shiller reports Not Seasonally Adjusted (NSA), I use the SA data for the graphs.

From S&P: Annual Home Price Gains Increased to 4.4% in March According to S&P CoreLogic Case-Shiller Index

Phoenix, Seattle and Charlotte reported the highest year-over-year gains among the 19 cities (excluding Detroit for the month). In March, Phoenix led the way with an 8.2% year-over-year price increase, followed by Seattle with a 6.9% increase and Charlotte with a 5.8% increase. Seventeen of the 19 cities reported higher price increases in the year ending March 2020 versus the year ending February 2020.
…
The National Index posted a 0.8% month-over-month increase, while the 10-City and 20-City Composites posted increases of 1.0% and 1.1% respectively before seasonal adjustment in March. After seasonal adjustment, the National Index and the 20-City Composite posted a month-over-month increase of 0.5%, while the 10-City Composite a posted 0.4% increase. In March, all 19 cities (excluding Detroit) reported increases before seasonal adjustment as well as after seasonal adjustment.

“March’s data witnessed the first impact of the COVID-19 pandemic on the S&P CoreLogic Case-Shiller Indices,” says Craig J. Lazzara, Managing Director and Global Head of Index Investment Strategy at S&P Dow Jones Indices. “We have data from only 19 cities this month, since transactions records for Wayne County, Michigan (in the Detroit metropolitan area) were unavailable.

“That said, housing prices continue to be remarkably stable. The National Composite Index rose by 4.4% in March 2020, with comparable growth in the 10- and 20-City Composites (up 3.4% and 3.9%, respectively). In all three cases, March’s year-over-year gains were ahead of February’s, continuing a trend of gently accelerating home prices that began last autumn. March results were broad-based. Prices rose in each of the 19 cities for which we have reported data, and price increases accelerated in 17 cities.
emphasis added 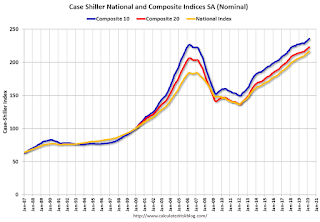 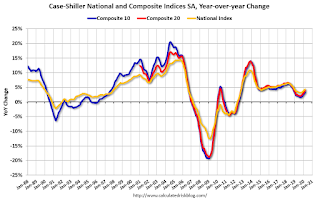 The National index SA is up 4.4% year-over-year.

Note: According to the data, prices increased in 19 of 20 cities month-over-month seasonally adjusted.