“Home prices finished 2020 with double-digit gains, as the National Composite Index rose by 10.4% compared to year-ago levels,” says Craig J. Lazzara, Managing Director and Global Head of Index Investment Strategy at S&P DJI. “The trend of accelerating prices that began in June 2020 has now reached its seventh month and is also reflected in the 10- and 20-City Composites (up 9.8% and 10.1%, respectively). The market’s strength continues to be broadly-based: 18 of the 19 cities for which we have December data rose, and 18 cities gained more in the 12 months ended in December than they had gained in the 12 months ended in November.
emphasis added 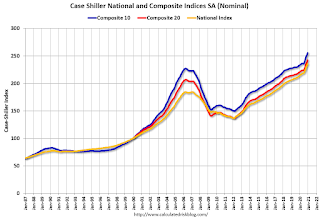 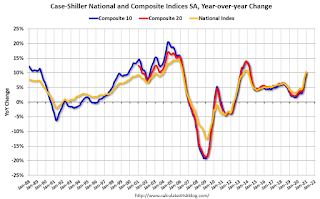 Note: According to the data, prices increased in 19 cities month-over-month seasonally adjusted.

Price increases were above expectations.  I’ll have more later.