July 17, 2020 admin
From the BLS: Regional and State Employment and Unemployment Summary

Unemployment rates were lower in June in 42 states, higher in 5 states, and stable in 3 states and the District of Columbia, the U.S. Bureau of Labor Statistics reported today. Forty-nine states and the District had jobless rate increases from a year earlier, while one state had no change. The national unemployment rate declined by 2.2 percentage points over the month to 11.1 percent but was 7.4 points higher than in June 2019.
…
Massachusetts had the highest unemployment rate in June, 17.4 percent, followed by New Jersey, 16.6 percent, and New York, 15.7 percent. The rates in these three states set new series highs. (All state series begin in 1976.) Kentucky had the lowest unemployment rate, 4.3 percent.
emphasis added 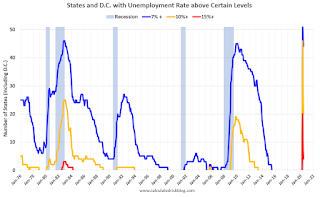 Currently 20 states are above 10% unemployment rate.

Note that the three states setting new highs were still in lockdown (the states that were hit hard by the virus early). 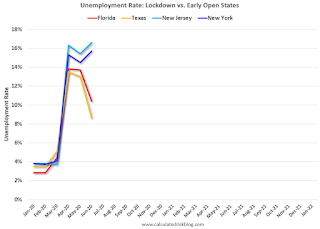 It seems likely the recent surge in COVID-19 cases in Florida and Texas will lead to higher unemployment rates in those states.