May 22, 2020 admin
From the BLS: Regional and State Employment and Unemployment Summary

Unemployment rates were higher in April in all 50 states and the District of Columbia, the U.S. Bureau of Labor Statistics reported today. Similarly, all 50 states and the District had jobless rate increases from a year earlier. The national unemployment rate rose by 10.3 percentage points over the month to 14.7 percent and was 11.1 points higher than in April 2019.
…
Nevada had the highest unemployment rate in April, 28.2 percent, followed by Michigan, 22.7 percent, and Hawaii, 22.3 percent. The rates in 43 states set new series highs. (All state series begin in 1976.) The rates in Hawaii and Nevada exceeded their previous series highs by more than 10.0 percentage points each, while the rates in Michigan, New Hampshire, Rhode Island, and Vermont exceeded their previous highs by more than 5.0 points each. Connecticut had the lowest unemployment rate, 7.9 percent. The next lowest rates were in Minnesota and Nebraska, 8.1 percent and 8.3 percent, respectively.
emphasis added 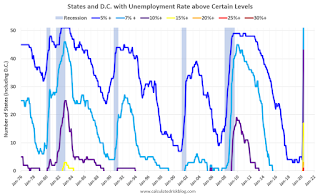 Currently 43 states are above 10% unemployment rate.

Seventeen states are above 15%.

Three states are above 20% (Hawaii, Michigan, and Nevada).

One state (Nevada) is above 25% unemployment.