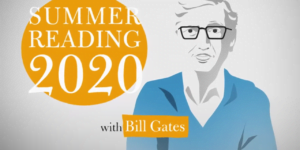 Bill Gates’s 2020 summer book list runs the gamut from seriously educational to seriously escapist. During the shutdown, Bill Gates had extra time to read. Here are five books that he highly recommends.

“The Choice: Embrace the Possible” by Dr. Edith Eva Eger

That’s a hell of a story.  The woman was a 16 year old girl in Auschwitz. She eventually does survive and gets out, moves to Texas and becomes this inspirational therapist. And half the book is her story, half is how she helps other people. When somebody traumatises you the way you think about yourself and your happiness and how you relate to the world. You can’t control being a victim, but you can control your victimhood. It’s kind of a hopeful story, but it’s very tough story.

It’s such an unusual book, and it’s clever. You go through six different epochs in history, where you have people making moral choices where you’d see how self centred and bad people can be and how supportive and good people can be. You really do feel he captures these different worlds. It’s a grand story about human nature and during human values.

“The Ride of a Lifetime: Lessons Learned from 15 Years as CEO of the Walt Disney Company” by Bob Iger

It’s hard to overstate how moralised and messed up Disney was things weren’t in great shape when they got rid of Eisner and I do consider it brilliant of Iger, that in an age where networks are not important. And you’re gonna have to go direct to consumer that you’ve got to have a critical mass of the greatest content. He did a really good job of explaining what the job of the CEO is.

“The Great Influenza: The Story of the Deadliest Pandemic in History” by John M. Barry

He explains how infections work and how the immune system works. The 1918 Spanish flu is the first world epidemic where it basically hits the entire world at the same time, the world was faced with this challenge. They tried to come up with drugs or therapeutics. None of those efforts were successful. Distancing and masks and seeing who’s coughing. That was all they had. If you read this, you will understand a lot.

This is the most important book the group because it really is about what do we know, in the field of economics that can take the current visions and try and do better? It’s global, but it’s mostly about the US. But it’s addressing the big issues of today about people in depressed areas. How can we be so rich? And so many people feel a lack of purpose. Why aren’t we better with economic knowledge of creating more opportunities? If you want to solve these problems, there’s a lot still to learn.

I found all these books really interesting and I hope you do also.