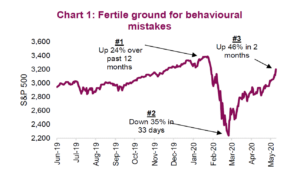 Behavioural finance has gained a considerable amount of popularity over the past few years as it pertains to investing. Among other things, it highlights how humans appear to be hardwired to make certain systematic mistakes despite our best efforts. Emotions get the better of us and this unleashes behavioural biases that negatively impact our decision making. The discipline of behavioural finance, which resides between economics and psychology, has researched and uncovered hundreds of these behavioural biases, highlighting how often humans make poor decisions.

However the discipline has fallen short on solutions – more often just highlighting our mistakes. Well that isn’t very helpful. In this Ethos, we will share a number of behavioral biases that have become more prevalent due to the bear of February/March and the huge rebound in April/May. And we will share strategies that we have developed to help our team manage money (and hopefully avoid as many pitfalls as possible).

We have yet to reach the half-way point for this calendar year, and so far, 2020 has created various environments or situations ideal for behavioural biases to get the best of investors. It actually started in late 2019 and greatly accelerated in 2020. Adding to our behavioural bias susceptibility is the emotional stress from the pandemic. We are concerned about our health, friends and families, while social support structures are lacking. 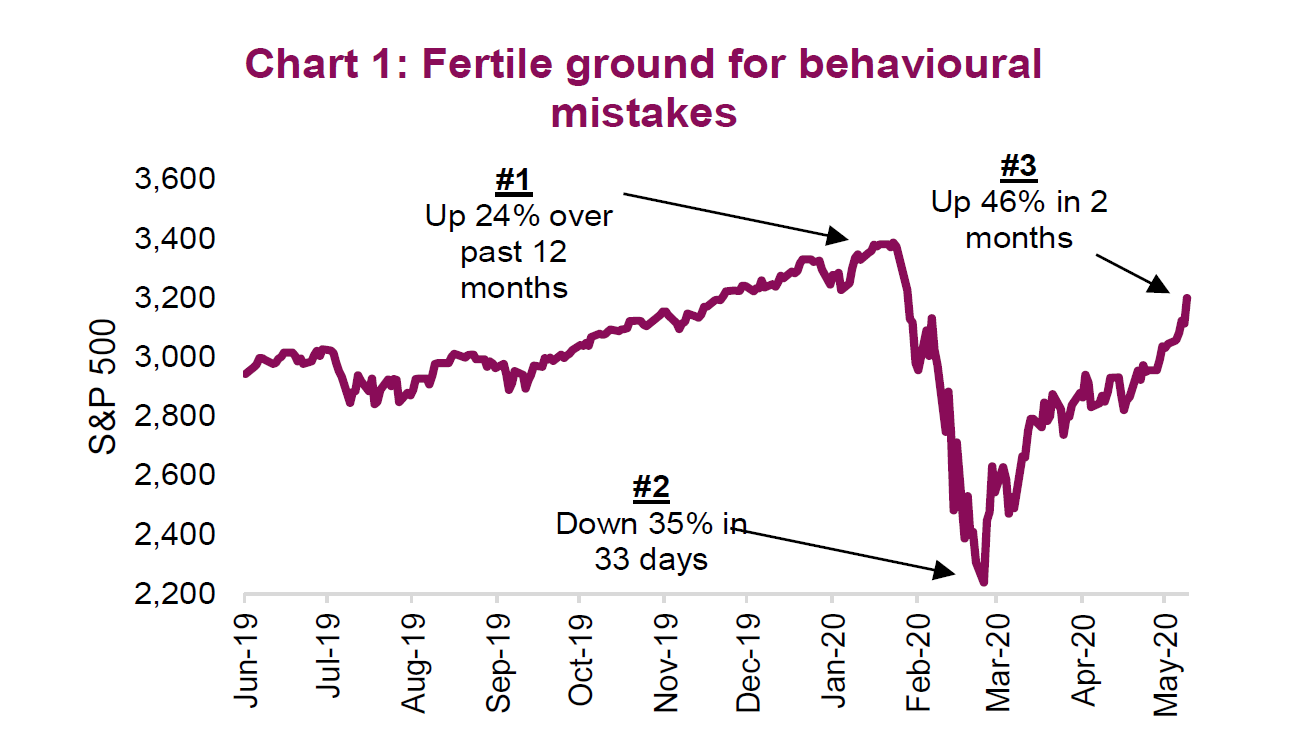 Phase #1 Up 24% in the past year – Before the pandemic gripped global markets, the S&P 500 staged a solid run in late 2019 and early 2020. Improving news on trade tensions had animal spirits gripping many investors. This had the S&P 500 up over 20% on a trailing annual basis, leaving no doubt that investors chase performance. In early 2020, intense speculation was elevated with companies like Virgin Galactic (space tourism) rising +250%, Tesla +120% and anything with an environmental tilt jumping higher. The ostrich effect – the attempt made by investors to avoid negative financial information (see details below) – was widespread. 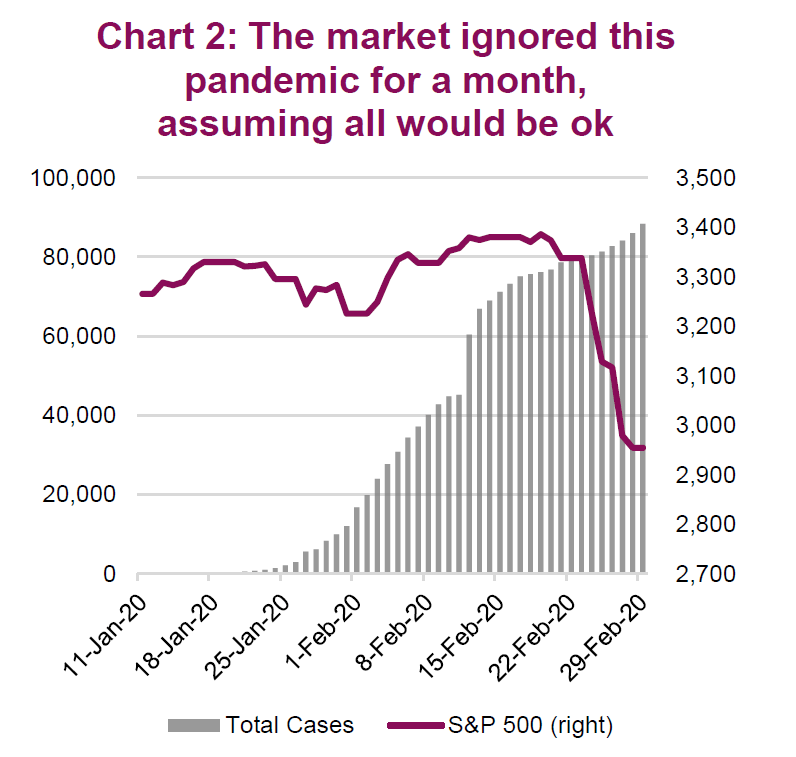 Phase #2 Down 35% in 33 days – The bull ended quickly and violently as the pandemic spread. Economies shut down, equity markets tumbled and bonds markets froze. Market sentiment has rarely moved from greed to fear so quickly. Availability along with recency bias was very evident.

Phase #3 Up 46% in 2 months – The fastest bear market in history has been followed by one of the biggest bounces, which will be the fastest recovery in history if markets rise a little more. Greed has not returned, but the fear of missing out (FOMO) is widespread at the moment. Availability, anchoring and FOMO have been impacting many investors.

Based on conversations with investors and advisors over the past few months, the following appear to be the most pervasive behavioural biases impacting investor decisions. We have also included strategies to help mitigate this flawed thinking, some of which are applicable today while others may be useful for the next cycle.

Everyone likes good news, being optimistic and making money. The ostrich effect occurs when we focus or place more emphasis on good news and ignore or downplay bad news (glass half full). In early 2020 this was the case as investors were more focused on the prospects of space tourism than a health crisis in China. Most of those who were aware of the pandemic touted comparisons with SARs, MERs or Ebola as a short-term buying opportunity (Chart 2).

This effect drives our attention away from bad news, almost as a defense mechanism. Investors most at risk of this bias are those who have become attached to a view, opinion or position for an extended period of time.

This bias appears at work today with most eyes glued to protests, wondering if this will cause an acceleration in COVID-19 cases. Meanwhile cases are rising very fast in developing nations. Less known information includes the fact that Italy and Spain have opened up and are seeing the fewest new cases since the start – fewer than Canada in fact.

Strategies to counter the ostrich effect

Strategies to counter the availability bias

We very often become anchored based on what we paid for an investment or by the fact that an investment traded at a certain level. This anchor price can have an outsized impact on subsequent decision making. This is the case even if that anchor price is no longer appropriate given the market environment or if the anchor itself was inappropriate.

At the moment, many investors are anchored to the lows of March, saying “how can I buy today given it was so much cheaper two months ago?” The TSX was below 11,500 in March and is now almost at 16,000. However, the March lows may not even be appropriate because they were exacerbated by the pandemic in full swing, a frozen corporate bond market and the most unknown outlook for the economic impact of social distancing. What we know today is very different – risk is less and prices should be higher (not sure they should be this high, but that is likely one of my biases talking).

A 46% bounce off the bottom has certainly elicited the FOMO feeling in many investors due to inaction or selling when fear was peaking. So many investors were waiting for a second bottom to put more money to work in the market. FOMO is driven in part by loss aversion in the sense that missing out on something good is considered a loss.

FOMO actually isn’t a behaviour bias, but the result of a few biases: loss aversion, herd behaviour and status quo bias. Not surprisingly, it impacts investors when markets or specific industries have a great amount of volatility (weed, bitcoin).

Weekly flows into equity funds and ETFs certainly makes it clear that FOMO is widespread. Notice the spike in redemptions near the bottom; there were some initial buyers early in the recovery but recently it’s been all selling (Chart 3). 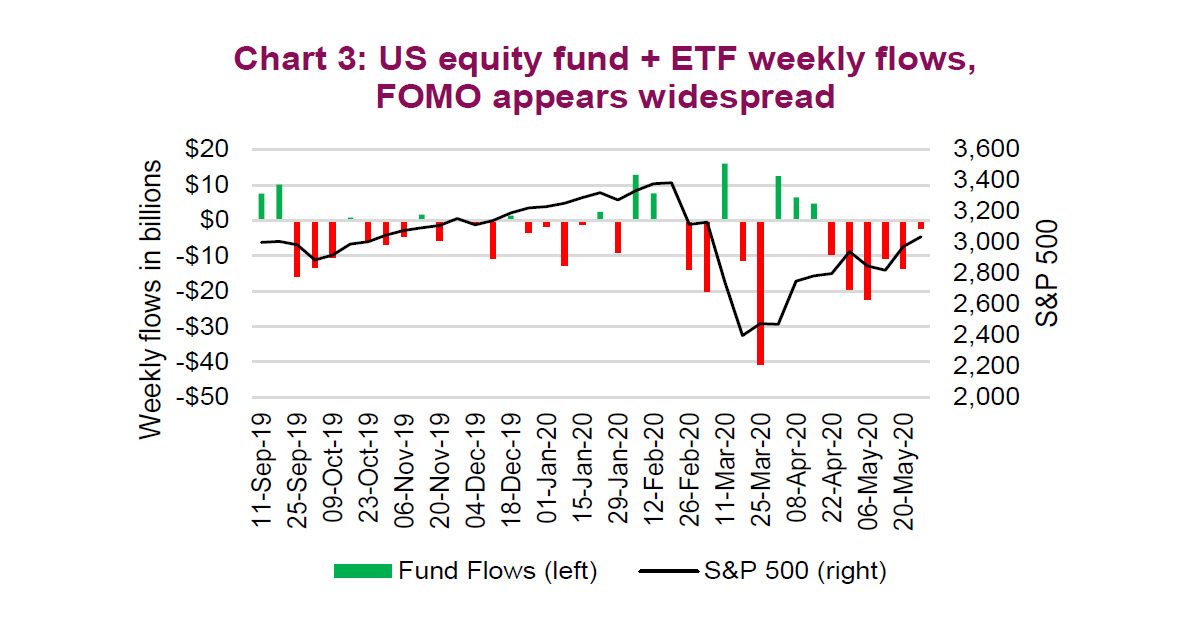 Strategies to counter the anchoring bias: