Stock traders just got a wakeup call and the Federal Reserve, warts and all, seems to have been caught napping. As a result, the stock market is on the verge of reversing its current association with Complexity, the positive forces of the Universe, and trading it in for a date with Chaos, the realm of Disorder.

Just six days into the official summer season, stock traders are suddenly seeing cloudy skies. Not only did the long-heralded seasonal Saharan desert storm cloud that’s been clogging up the Caribbean of late finally hit the U.S., creating hazy sunsets and COPD exacerbations, but the stock market seems to have decided that it has rallied far enough for now and that the bears are going to get a go at things.

Moreover, from a technical standpoint, as I will elaborate below, there is now the imminent danger of a highly accurate technical signal – Duarte’s 50-50 rule, which I developed – delivering a sell signal, which, if triggered could lead to a significant decline in the stock market. For more details, read directly below.

Certainly a bumpy market is not altogether surprising, as I noted here two weeks ago and in the June 19, 2020 episode of Your Daily Five. In addition, as I wrote in last week’s edition of this column: “As the traditionally sleepy summer trading season rolls into high gear, the combination of low volume and anemic liquidity from the Federal Reserve may make for a bumpy market.” That is exactly what happened.

And while the conventional wisdom says it’s all about the algos freaking out over COVID-19 headlines, the decline in stocks is just as much about the reduction in the amount of Federal Reserve money being pumped into the U.S. Treasury bond market, creating a liquidity vacuum in the stock market. In fact, the Fed has gone from putting as much as $300 billion in a single day into the markets in mid-March, the act that kicked off the recovery rally for stocks, to its paltry-by-comparison $4 to $4.5 billion per day scheduled to be infused into the system during the month of July.

Sure, $80 billion is a lot of money to print in a month. Moreover, if you’re a purist, you’re asking why the Fed is papering over zombie debt in the first place. And you would be right on both counts. However, from a trading standpoint, $4.5 billion a day – regardless of whether it is 1) ultimately right or wrong from a fiscal and philosophical standpoint, or 2) whether it has potentially negative repercussions for the future – is just not enough money to keep the stock market rallying in the face of COVID-19 uncertainty.

Clearly, the algos have been conditioned by two major external factors. Like Pavlov’s dogs salivated each time they were presented with treats, so to do the algos react to every single headline and to the Fed’s market operations.

Thus, because there is no escaping the digital Pavlovian dynamic in this market, the bottom line is that either the Fed ponies up more helicopter money or the odds of a resurgence of the bear market are rapidly on the rise as the algos respond to the no-bid market by lowering the bid-ask spread, as they simultaneously short stocks accelerating the downside. Therefore, unless things change, the resulting reality could be another seemingly endless cascade of selling begetting more selling.

So, as the next algo-fueled mess develops, we should all ask these important questions:

The cynical answer is that only the Asleep-at-the-Wheel Fed and the Pavlov algos know.

Can Biotech Survive a Bear Market?

In preparing for this week’s column, as I reviewed the increasingly negative situation in the stock market, I noticed that the biotech sector, as in the iShares NASDAQ Biotechnology ETF (IBB), had a down day on June 26. But, unlike other sector ETFs in the market, IBB managed to hold well above key support and remained near its recent high.

Indeed, both facts are indicative of a sector which is showing relative strength. Moreover, it makes sense to keep an eye on this general area of the market, as it is likely to play an increasingly significant role not just in the fight against COVID-19 but also in the war on cancer, the battle against rare diseases and increasingly on more common diseases where traditional treatments are running into limitations. 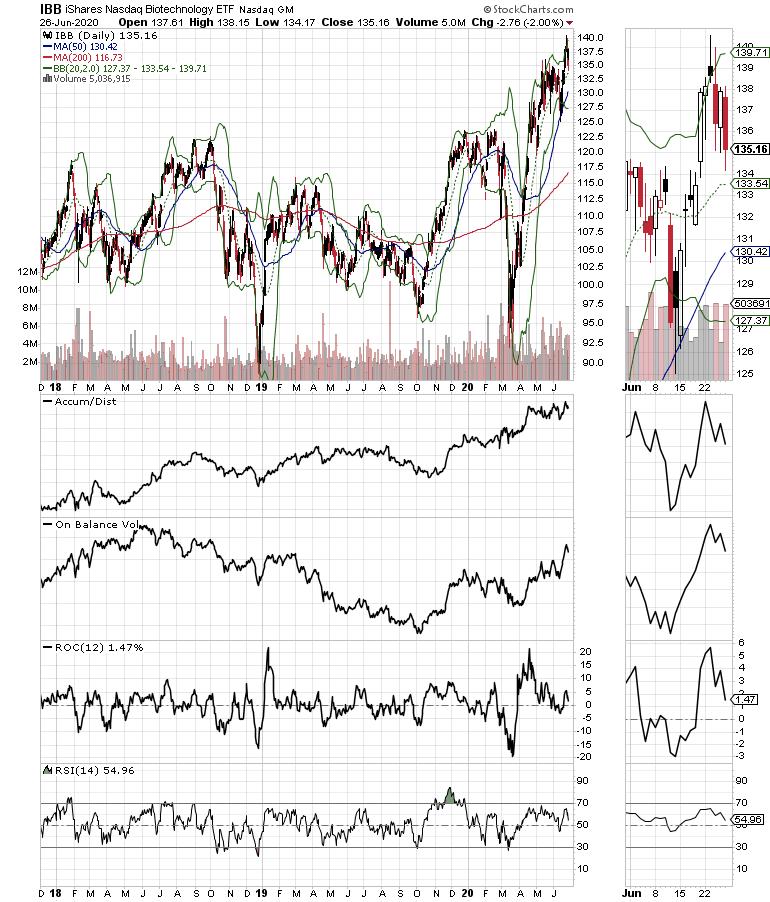 IBB is an ideal way to invest in biotech. For one thing, it saves the trouble of having to research individual companies in the sector. For another, its diversification among a fairly large group of biotech stocks can cushion the downside that comes along with bad news to any individual stock in the sector.

That said, I wouldn’t rush out and load up on IBB, or any other stock or ETF at the moment, because of market risk. Nevertheless, given the recent momentum thrust in the biotech sector, in the wake of its outstanding fundamentals, a pullback of 10% or more could deliver a nice buying opportunity at some point in the future. This would be evident, especially if IBB can stay above its 200-day moving average on a break below its 50-day moving average. An even better show of relative strength would be if IBB could actually hold above its 50-day moving average, especially if the market was to break down decisively.

I have identified one very attractive biotech stock, even in this market. I am describing this stock in detail, including detailed company fundamentals, key technical aspects of the trade and specific entry/exit points to my current subscribers.

To gain access to this interesting pick, and the rest of my current recommendations, including three inverse ETFs which could rally in a big way if the market crashes, consider a FREE trial to JoeDuarteintheMoneyOptions.com.

The New York Stock Exchange Advance-Decline line (NYAD) has been the most accurate indicator of the stock market’s trend since the election of Donald Trump. The 50-50 signal is very simple. As long as NYAD remains above its 50-day moving average at the same time that it remains above the 50 level on the RSI indicator, the trend in NYAD and the stock market remain up. Moreover, breaks below the 50-50 areas are usually followed by meaningful market declines. 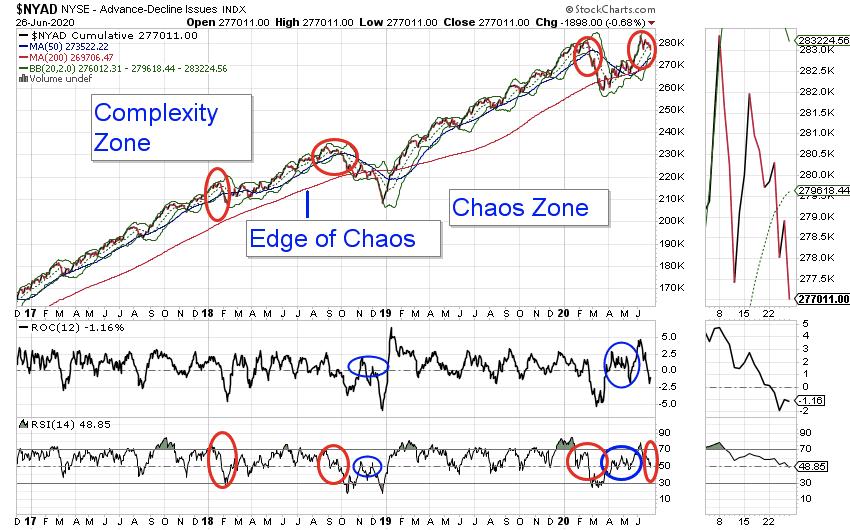 Unfortunately, after the market selloff on June 26, the NYAD 50-50 Rule is close to giving a sell signal as RSI broke below 50 while the advance-decline line is on the verge of breaking below its 50-day moving average. Clearly, as the chart above illustrates, 50-50 sell signals on the NYAD are meaningful and are marked on the chart by red ellipses. 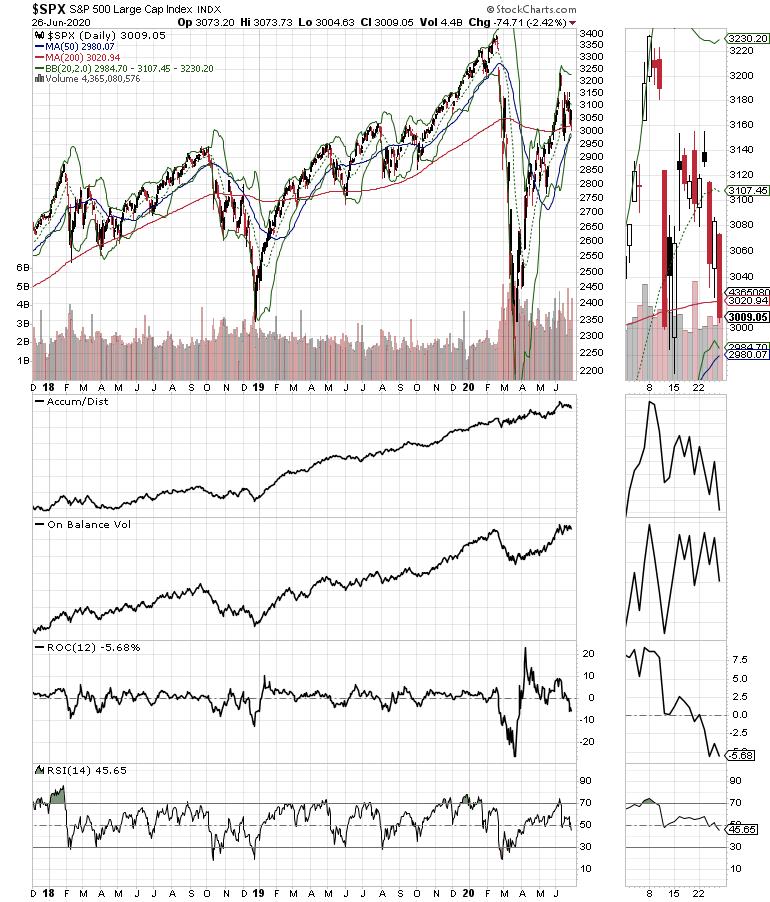 Moreover, highlighting further weakness in the market, the S&P 500 has broken below its 200-day moving average as well as triggering a break below the 50 area on its RSI indicator. Nevertheless, it is important to note that the NYAD gets the senior ruling as a 50-50 Rule sell signal in this indicator has more weight on the general trend of the market than the action in the major indexes. 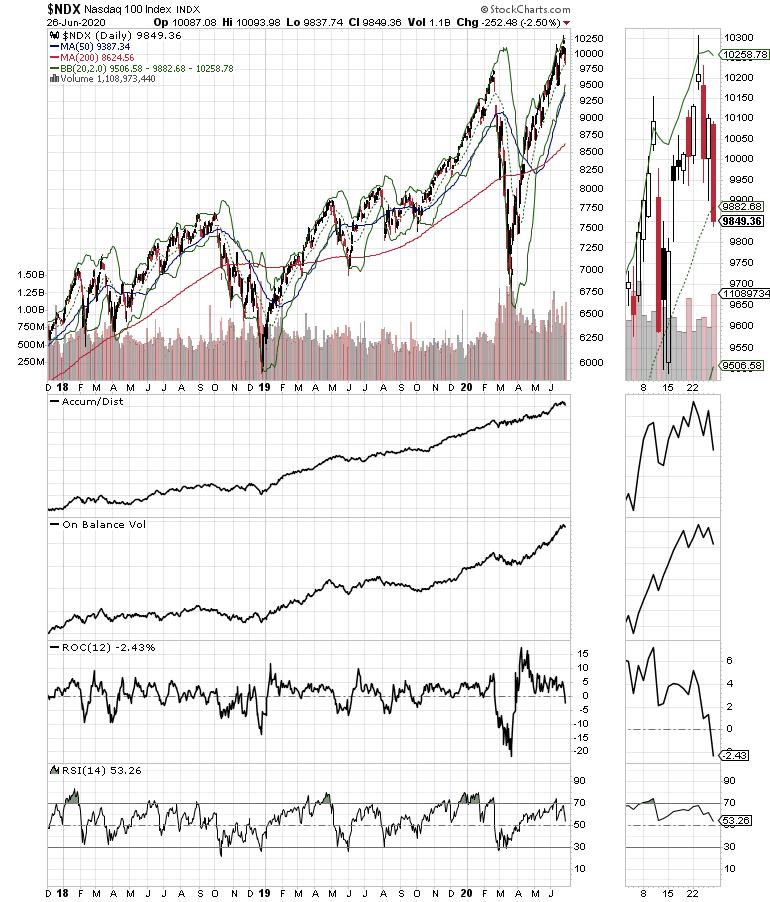 For its own part, the Nasdaq 100 Index (NDX) is nowhere near a 50-50 sell signal, which suggests that technology stocks, even as they fall, may not fare as badly as the more diversified sectors in the S&P 500. Moreover, some of the resilience in NDX is likely due to the muted selloff in the biotech shares housed in the index.

Welcome to the “Cruel, Cruel Summer”

Last week, I posed the question of whether this would be a “Summer of Love,” or a “Cruel, Cruel Summer.” Well, with the stock market’s technical posture rapidly deteriorating and the Federal Reserve stuck in the mud, the odds favor a continuation of the downside action, at least in the short term. As a result, active traders should have started to raise cash, tightened sell stops and implemented hedges.

How low can this go? No one knows. The way this market has acted over the last few months, it could well set a new high in a few days. However, if the NYAD breaks below its 50-day moving average, a trip to its 200-day moving average is well within the normal technical expectation. That could translate into fairly steep losses for individual stocks and the major indexes.

I certainly could be wrong and the market could find its sea legs and move higher. Moreover, the Fed could slow this process, or even be able to stop it if they increase the amount of money they inject into the bond market and the banking system. But even if the Fed acts aggressively, there are no guarantees. So it is now worth considering that, if this goes on for another few days, we may be in for a great deal of pain.

Welcome to the cruel, cruel summer.