As the traditionally sleepy summer trading season rolls into high gear, the combination of low volume and anemic liquidity from the Federal Reserve may make for a bumpy market, although in the current Post New Normal period, there are no guarantees that seasonal patterns will remain in effect. Case in point was Friday’s sudden market reversal on news that Apple (Nasdaq: AAPL) would close some of its stores in response to news that COVID-19 cases were rising in Arizona.

It’s Still All about the Fed

Last week, in this space, I wrote: “If the Federal Reserve doesn’t change its current policy implementation methods, the 1800-point decline in the Dow Jones Industrial average we saw on June 11 will happen over and over again.” Fast-forward to today, nothing has changed. Moreover, we now know the central bank is caught in a bind as the markets, the economy and people’s lives, otherwise known as the complex adaptive system called MEL, decide what to do next. Most importantly, because of the insurmountable debt in the system, MEL will rise and fall based on what the central bank does.

What I’m saying is that MEL is looking to the Fed for the fuel to feed the fire, as the only way the system can function is via the continuous infusion of large-enough amounts of money to keep a semblance of economic activity going.

The problem is that the Fed has decreased the amount of money it is pumping into the Treasury bond market, moving from a high in mid-March of $300 billion in one day to a paltry $4 billion per day until the end of July. And, although the central bank announcement last week that it would start buying corporate bonds kept the market from falling apart, there was only a muted follow-through to the initial rally move.

This lack of bullish conviction in stocks is present:

Here’s the issue. When the Fed buys Treasury bonds, it does so from banks or financial institutions which hold the bonds. In turn, the financial institutions who sold the bonds to the Fed theoretically use the money to improve their balance sheets and to make loans to consumers and businesses. Unfortunately, much of the money goes to servicing or restructuring debt, buying back company stock and just about everything except taking care of the business. This results in so called zombie companies and zombie personal finances, where debt servicing is the only use for money.

So the big question is whether the money the Fed injects into the corporate bond market will do any good for the real economy, such as it is, given that it’s not clear who the sellers will be and which bonds the Fed will buy. Specifically, which corporate bonds will the Fed buy? How much money will the Fed put into this venture? And if they end up buying the bonds of zombie companies, who gets the money and who benefits?

In fact, recent Fed balance sheet data suggests that the central bank has only bought $6 billion worth of corporate bonds up to now. That’s not even enough to fuel two days worth of treasury purchases. Therefore, it is plausible to consider that the Fed may be running out of bazookas and everything now hangs on whether enough people can return to work and consumption, in order to keep those businesses best poised to survive in the next chapter of the Post New Normal afloat.

For now, we can say that some sort of bottom may have formed in the economy, but that is certainly tentative at this point. We can see that in the slowing pace of jobless claims and in the recent rebound in the national payroll numbers. Mortgage activity and retail sales have also bounced back. And my own “kick the tires” analysis of daily life tells me the roads are full of people and the number of semis and pickup trucks is on the rise. That means that there is economic activity, at least in my neck of the woods. Moreover, I’m seeing a rising number of license plates from Nebraska, California, New Jersey and Iowa, which tells me the migration to Texas has resumed.

All things considered, the data remains spotty, and it’s difficult to discern whether Dallas is an anomaly. Certainly, even here a fair number of businesses have closed, some are surviving and others seem relatively unaffected. For example, traffic at the nearby Home Depot (HD) I frequent has not changed one bit since the first couple of weeks of COVID-19 situation. In fact on a visit on June 18, the place was packed, which tells me that people are still doing home repairs.

As a result, I’d appreciate some reader input on this. So send me a quick email describing what you’re seeing in your area of the country or the world. Please include examples such as I describe of what you see at retail stores, as well as vacancy rates in shopping centers, freeway traffic, anecdotes from friends, etc. by emailing here.

For more details on the summer trading season, catch my most recent Your Daily Five installment here (or watch below). To subscribe for a FREE trial to Joe Duarte in the Money Options.com, click here.

The stock market may be missing something here.

Shares of meat processor Hormel (NYSE: HRL) have been disappointing over the past couple of years. Okay, let’s get it out in the open right now; Hormel is the proverbial disappointment wallflower stock. In fact, every time the stock approaches a chart breakout point, something comes out of blue and takes the share price down. So, as the stock approaches yet another breakout opportunity, it makes sense to see if this will be the time that it actually delivers. 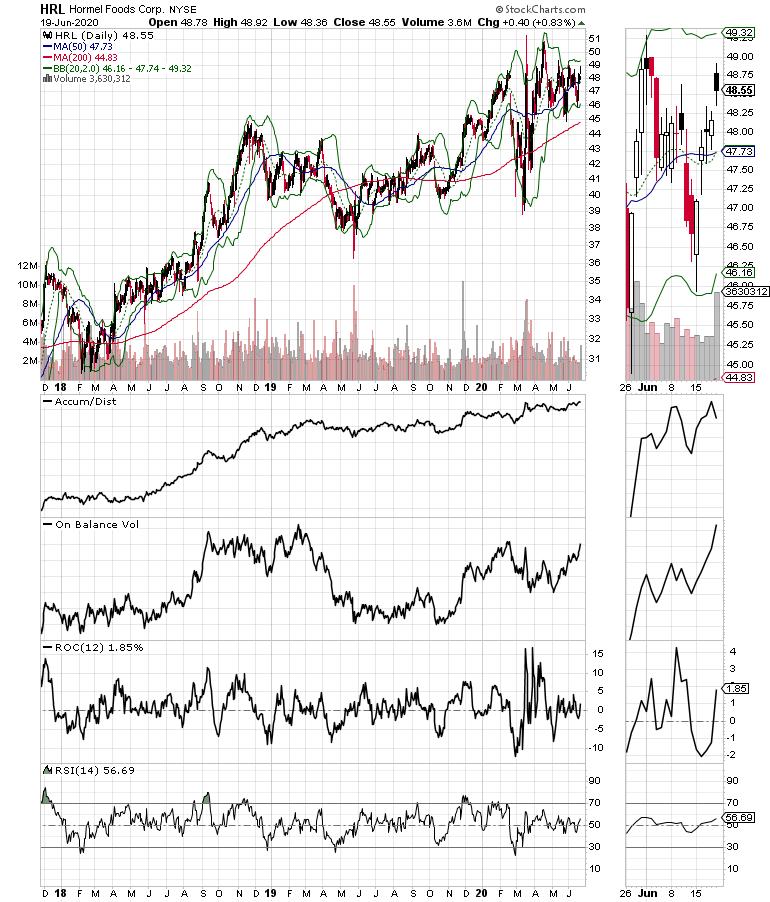 Hormel is best known for SPAM, a canned meat standard. But it’s actually got a broad variety of other pork- and beef-related products, especially its Hormel canned Chili and its organic, gluten free, non-GMO Mary’s Chili Verde, which make for an interesting product mix. I must admit, I am partial to Mary’s Chili Verde, and recommend it, especially for those nights when you don’t want to cook, even if you don’t buy the stock.

The big question is why isn’t Hormel trading well above $50 when the China trade pact, political warts and all, should have increased its exports, especially of pork? Moreover, in the wake of reports of beef shortages expected for the summer in response to COVID-19-infected meat processing farms, the stock should have popped. The latter point is even more poignant given Hormel’s increasing market share in the turkey market, given that turkey would be an adequate replacement for beef, especially during the summer months.

Specifically, in its May earnings report, Hormel reported increases a 16% increase in its retail sales growth, along with decent organic growth and overall product volume. Its only segment decreases were in frozen foods and international, which were flat. Moreover, its turkey sales grew by 12%, which suggests that consumers were making a change in their dietary habits due to prices for beef. I’m thinking the market may be underestimating Hormel’s positive potential here and that the company may actually deliver even better results in its next quarter if it can keep the momentum going, especially if beef prices remain high as the summer grilling season heats up.

The bottom line is that, if HRL can take out $49, it could well work its way to the mid-50s in a hurry. And with China suddenly announcing that it may start to play catch up on its U.S. Trade commitments, this stock could deliver more of a Hot Chili, Hot Turkey set of results than many expect.

The New York Stock Exchange Advance-Decline line was in a good mood all week, but ended on a sour note due to the market’s selloff after the Apple store-closing news. What that does is leave things in neutral. Certainly, the uptrend can be described as intact, but momentum seems to be once again waning, which sets a cautious tone for the short-term. 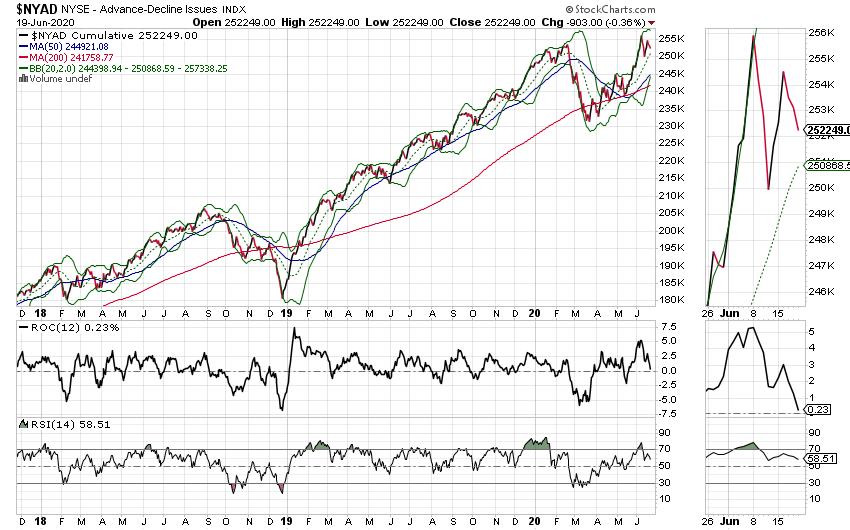 The Nasdaq 100 index (NDX) continues to flirt with new highs, even after Friday’s pullback, as money continues to move into technology stocks. 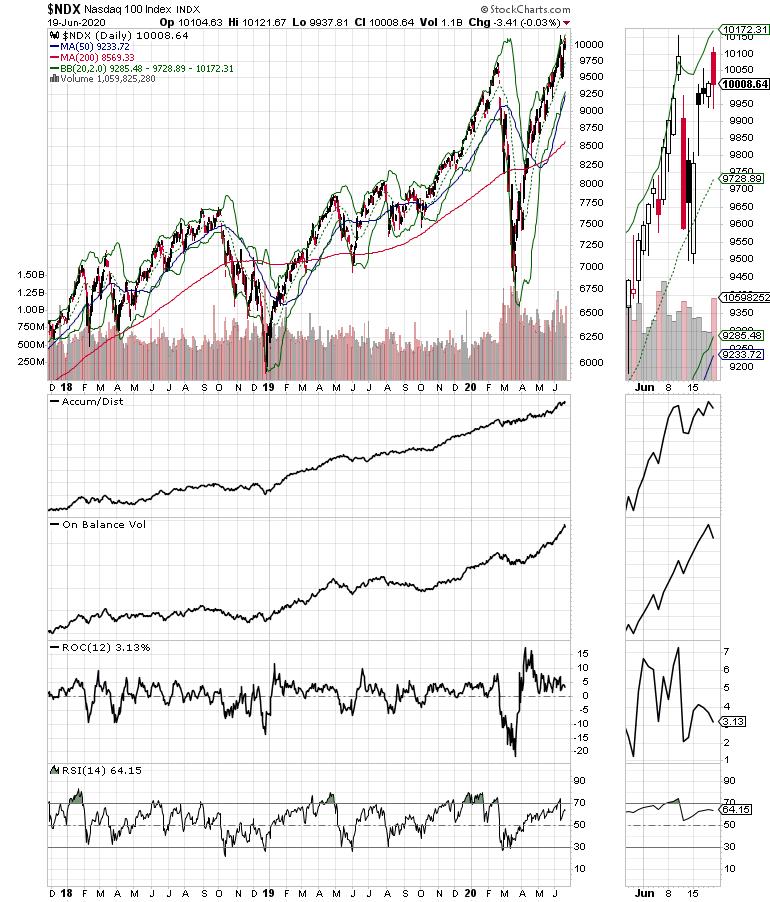 The S&P 500 (SPX) continues to lag the technology sector but managed to hold above the support of its 20-, 50- and 200-day moving averages. Accumulation Distribution (ADI) and On Balance Volume (OBV) for both indices rolled over at the end of last week, two indications that we could be in for a bumpy ride in the short-term. 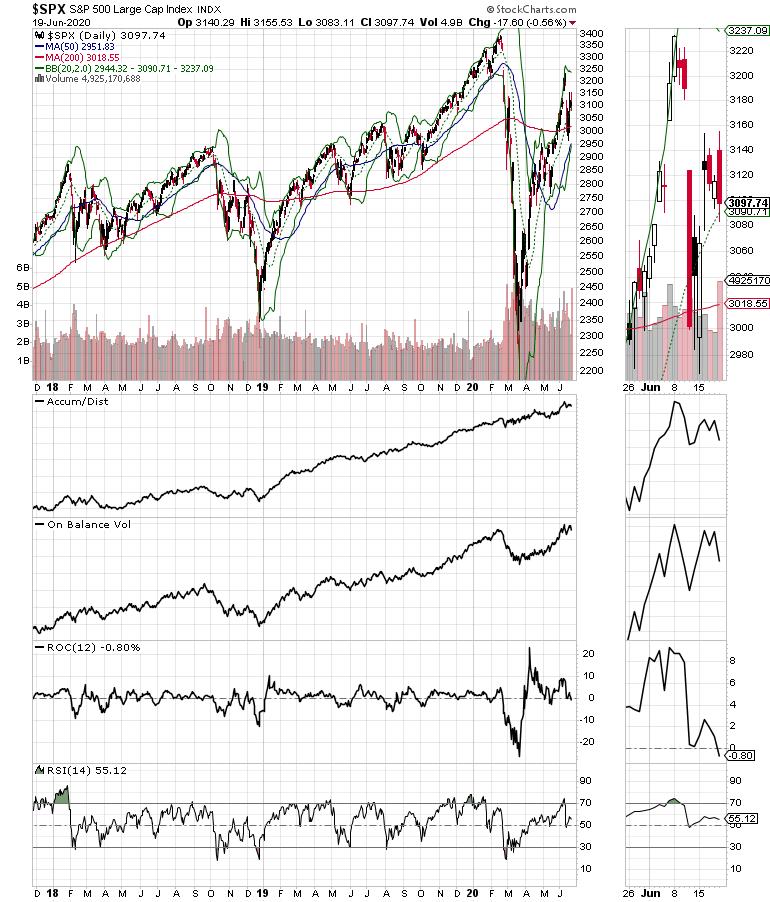 The market seems to have a hard choice for the summer trading season, which may surprise us with a bullish move – a summer of love, if you will – or a bearish move, such as pop girl group Bananarama once sang in their 80s hit “Cruel Summer.” Much depends on the Fed and the news cycle, especially election- and COVID-19-related news.

Still, as long as the trend remains up, we must trade the market from the long side, albeit with sound money management techniques such as small lots, taking profits on big gainers, using prudent sell stops and managing position size.

The bottom line is that this could be a long, hot and exhausting trading summer.