The bulls lived to fight another day last week, as the potential sell signal from Duarte’s 50-50 Rule did not come to pass. So for now, instead of a “cruel, cruel summer,” investors seem to have just gotten lucky once again, especially when you consider the fact that the Fed will almost likely rev up the QE machine in the not-too-distant future or risk another bear raid.

Certainly, liquidity is the dominant theme in the market. Moreover, there are emerging signs that the Fed’s lack of largesse in terms of money creation is starting to create yet another potential freeze-up in bond land, which, if not remedied, will almost certainly turn into a problem for the stock market. Get the details here.

That Was a Close Call

We almost got a big-time sell signal last week regarding the 50-50 rule, which is triggered when the New York Stock Advance Decline line (NYAD) breaks below its 50-day moving average as its corresponding RSI indicator breaks below its 50 line simultaneously fail to materialize. But we are not out of the woods yet. That’s because the Federal Reserve is still only pumping $4.5 billion into the Treasury market on a daily basis, which, as the stock market’s recent hiccups suggests, is simply not enough money to keep the stock rally going.

Last week, in this space, I noted: “The way this market has acted over the last few months, it could well set a new high in a few days. However, if the NYAD breaks below its 50-day moving average, a trip to its 200-day moving average is well within the normal technical expectation. That could translate into fairly steep losses for individual stocks and the major indexes.”

Thankfully, the bulls got a reprieve. But, as I noted above, the Fed is likely to increase its money pumping into the bond market, but the central bank is still not all in. Moreover, as I point out below, we have not received the “all clear” signal that the bull market is fully back in business. Thus, we are in familiar territory, which means that, above all, attention to individual positions and adherence to sound trading principles is the key to success as we wait for the Fed’s next move.

Here is a review of the keys to success:

Aside from the market’s lack of a bearish break, which is great news, the macro data tells us that before the recent surge in new COVID-19 cases, people were going back to work, consumer confidence was rebounding and, as reported by PMI data, the U.S. economy had at least bottomed out. The problem is that we really don’t have any data that tells us what’s happening after the latest surge in positives.

Indeed, the constant worrying remains a bullish factor, as the one consistent dynamic of this entire bull market from the bottom in 2009 has been the presence of a persistent wall of worry. Moreover, when that wall of worry began to dissipate in the late spring, after the March bottom, the market started showing signs of topping out.

In fact, just before the COVID-19 resurgence, I asked subscribers to send me anecdotal information about their geographical areas. I was looking for information to help me make sense of the state of MEL, the complex adaptive system composed of the Markets (M), the Economy (E) and people’s Lives (L).

And what I received painted a fairly positive and similar picture to what I was seeing in Dallas at the time; clear signs of increased activity in the form of full freeways, improved traffic at restaurants and grocery stores and (mostly) active retail activity, especially at places like Home Depot (HD) and grocery stores.

Interestingly, one subscriber from California also noted heavy traffic at Home Depot, but also empty shelves, which I have not seen to a great degree at HD. I’ve also heard general misgivings about the potential for Christmas merchandise being delayed this year. Someone from Florida astutely noted decreasing traffic in the Brickel financial district in Miami, just days before the news of the COVID surge hit the mainstream media, which suggests that the number of Florida cases was already rising.

A sub from Chicago noted muted activity in small restaurants in his area and wondered if these small businesses were going to make it. Meanwhile, someone from Pennsylvania reported concerns about the future of the education system in his area, due to kids being not sure about returning to school in the fall.

What this anecdotal evidence suggests, combined with the improving employment and economic data, is that before the new case surge, we were starting to see a recovery, albeit somewhat uneven in multiple areas of the country and not without risk to certain sectors. Just the same, since there seems to be a reasonably good correlation with what we’re seeing in terms of on the ground data, it’s important to keep tabs on this type of information.

So now, I’m looking for clues as to what’s happening now in MEL as the COVID cases increase across the country. Specifically, it’s good to know what’s happening in real-time and compare it to what the algos think is going on, as we may be presented with a great buying opportunity or an equally important exit point.

Presently, what I’m seeing in Dallas is a slight decrease in freeway traffic combined with a pronounced decrease in major avenue traffic, while retail seems to be holding up.

Let me know what you’re seeing by emailing me here.

The biotech sector remains a minefield for those making big bets on the next great COVID-19 treatment or vaccine headline. Yet, as I’ve noted for months, there is a better way to play the sector, which is via companies whose roles in the daily grind of drug manufacturing and research will remain crucial regardless of the ups and downs of any particular acute developments. 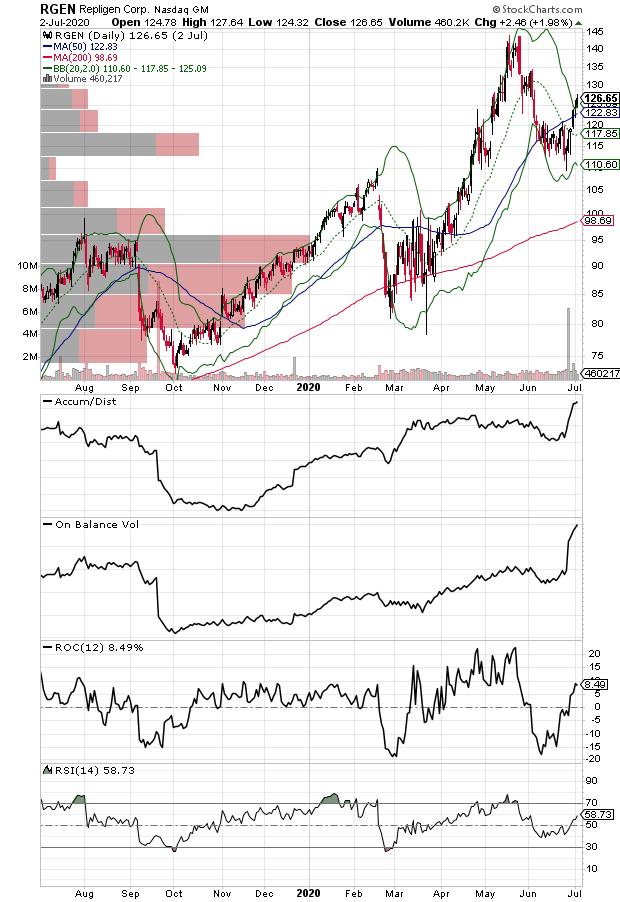 One such company is the little-known Repligen (RGEN), whose business focuses on the production of basic proteins and manufacturing systems used by biotech and pharmaceutical companies to actually make cancer treatments, gene therapy and other biologically-derived treatments and drugs. Here is my point; in the past quarter, Repligen beat earnings and revenue expectations, expanded its margins and made several key acquisitions which will help it expand its manufacturing base and, thus, its ability to meet the rising demand for the tools required by advanced cancer, rare disease, rheumatoid arthritis, and even developing treatments for traditional ailments such as diabetes.

Moreover, its equipment and basic medication components will also likely play a role in the manufacturing of any successful COVID-19-related treatments. In other words, RGEN is a central company to biotech, which means that the odds of a continuation of its recent upward thrust are favorable as more investors catch on to what’s going on with the company.

Technically speaking, the stock is now under intense accumulation after a pullback to its 50-day moving average. Note the huge improvement in Accumulation Distribution (ADI) and On Balance Volume (OBV), while the Volume by Price indicator is telling us that there is little upward resistance to any price advancement at the moment. Therefore, if there are no extraordinary developments, I expect a test of the old highs near 145.

I recently recommended RGEN to subscribers of JoeDuarteintheMoneyOptions.com. To gain access to my latest picks consider a FREE trial. Click here for details.

Trend Remains Up as NYAD Lives to Fight another Day

The New York Stock Exchange Advance Decline line (NYAD) remained above its 50-day moving average last week, while the corresponding RSI indicator bounced back above its 50-day line. That means that, until proven otherwise, the trend for the stock market remains up and the 50-50 Rule sell signal did not materialize. 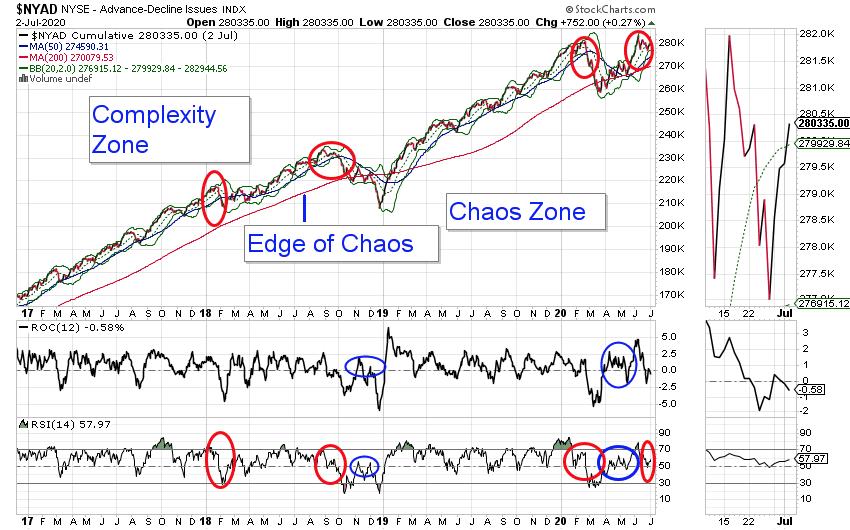 The S&P 500 (SPX) also recovered and closed the week above its 200-day moving average, reversing what seemed to be a darkening picture for the stock market. 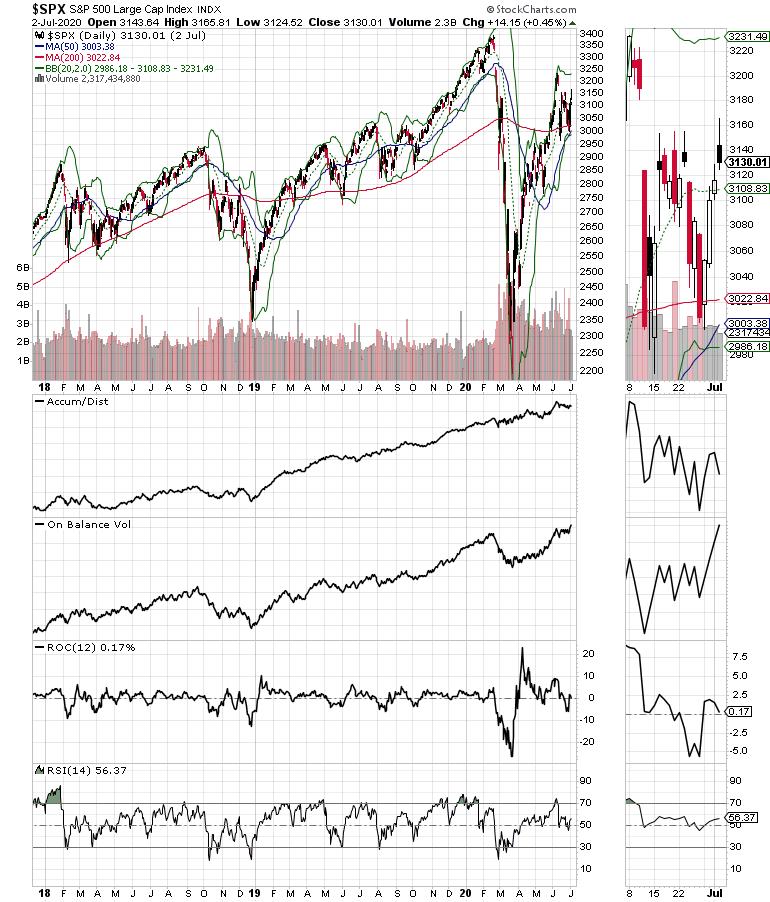 Moreover, the Nasdaq 100 (NDX) made a new high, with a significant rise in Accumulation Distribution (ADI) and On Balance Volume (OBV) suggesting that money is moving back into the stock market. 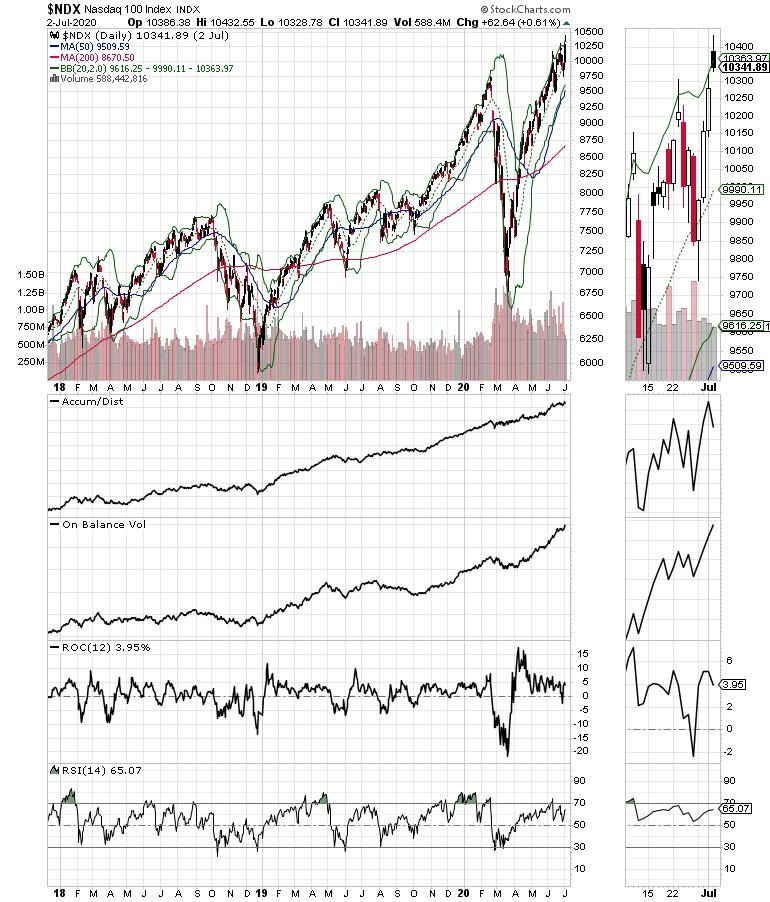 What we need to see now, however, is a new high on NYAD to confirm the move in NDX. If there is no confirmation in the next few days, we would have a potential negative divergence, which could be a prelude to yet another opportunity for the 50-50 rule to give us a sell signal.

The bull market escaped a potentially sizable decline last week. And, while that was a positive development, all the market accomplished was the avoidance of a major breakdown. What we need to see now is a resumption of the upward momentum, as would be signaled by a new high on the NYSE Advance Decline line.

I’m not expecting any slowing or changes in the political warfare that is ongoing or a sudden end to the COVID-19 pandemic. So what it all boils down to for the stock market, as it has for the past several weeks, is whether the Fed will convince the market that its current $4.5 billion daily injection into the Treasury bond market, along with its other interventions, will be enough to keep the stock market liquid or whether the market will increase the pressure on the Fed to juice up the QE machine once again.

We should know fairly soon.