I sat down to write my article Friday morning and each time I thought I had the right headline — I didn’t!

You see, it’s different when the market is green, the VIX is calm, all is well. It’s another thing when the NASDAQ is down over 400 points and 750 off from the prior day’s high and the VIX suddenly spikes 25%. So the message starts to change. Your thinking goes from “Opportunities Abound” to “How bad could this get?” As usual, it’s probably somewhere in-between.

For example, though the NASDAQ remains well off of its all-time high, it’s also quite a bit higher than the January 24 low, when the market had gone into a tailspin. Could we revisit that 13,094 level? You bet. But just think about everything that’s been thrown at the market lately, including the likelihood of multiple Fed rate increases, the increased tensions between Russia and Ukraine, a new strand of virus that threatened to close things down again, a spike in inflation the likes of which we haven’t seen since the early 1980s… that’s a LOT for the market to absorb. Yet here we are, with all of the major indexes still substantially higher than they were from that January 24 low.

So what’s one to do on a day like we had on Friday? One option is to just step to the sidelines and wait things out. Probably not a bad idea. Well, in my case, I went shopping! In fact, I saw myself shopping on the heavily discounted aisle, nibbling on some very beaten-down stocks including TWLO, AFRM and PYPL. Did I get them at rock bottom prices? I’m going to find out.

In the case of TWLO — who released decent earnings last Wednesday — the stock had a wild ride of its own, spiking as high as $260+ (after hours) after the earnings release (on what was seen as positive news) to a low of $187.21 on Friday. That $70+ turnaround caught my attention (even though the stock did take a technical hit), as did the huge green volume bar on Thursday compared to the much lighter red volume bar on Friday. 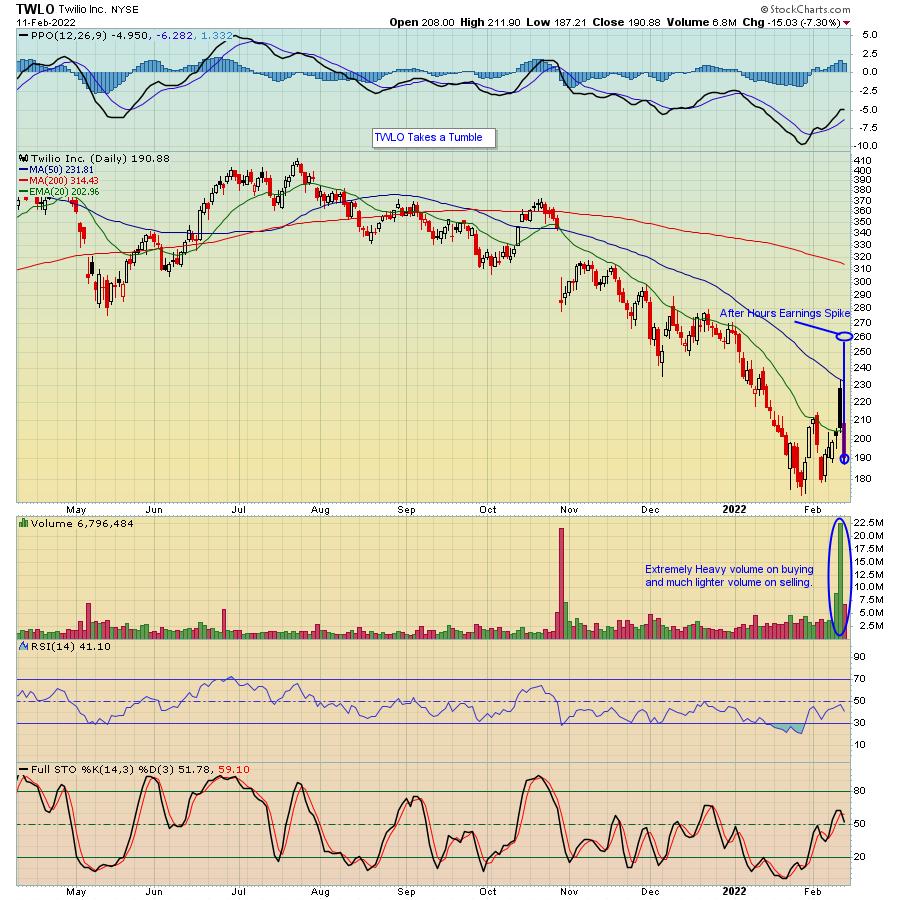 After I went to the TWLO aisle, I turned my attention to highly discounted AFRM aisle, with the stock going from a high of $176.65 three months earlier to a low of $45.58 on Friday after they had reported earnings and “only” guided 5% higher for 2022, apparently some kind of disappointment, enough to take it lower by 21% on Friday. It did manage to close very slightly above its all time low of $46.50, but not by much. 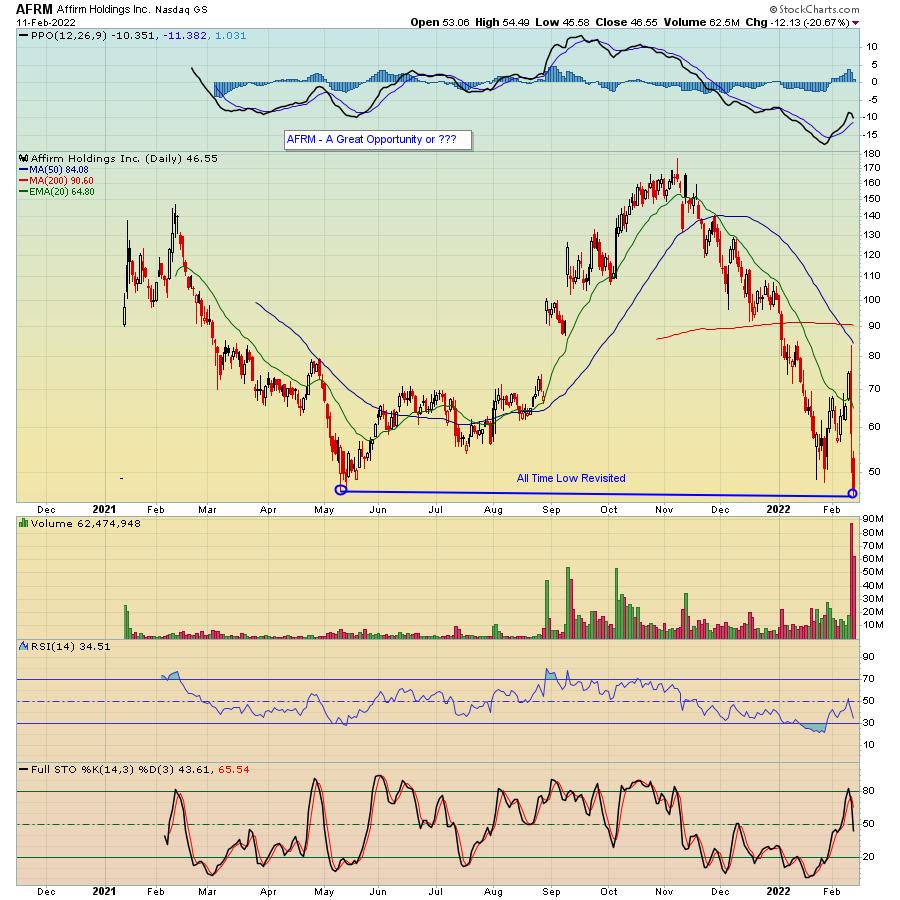 Finally, I moved into the PYPL aisle, where I saw the stock had been discounted a few hundred points from its July 26, 2021 high. Not only that, but both the RSI and Stochastics are showing the stock is very oversold, so I decided “I’ll take some of that!” 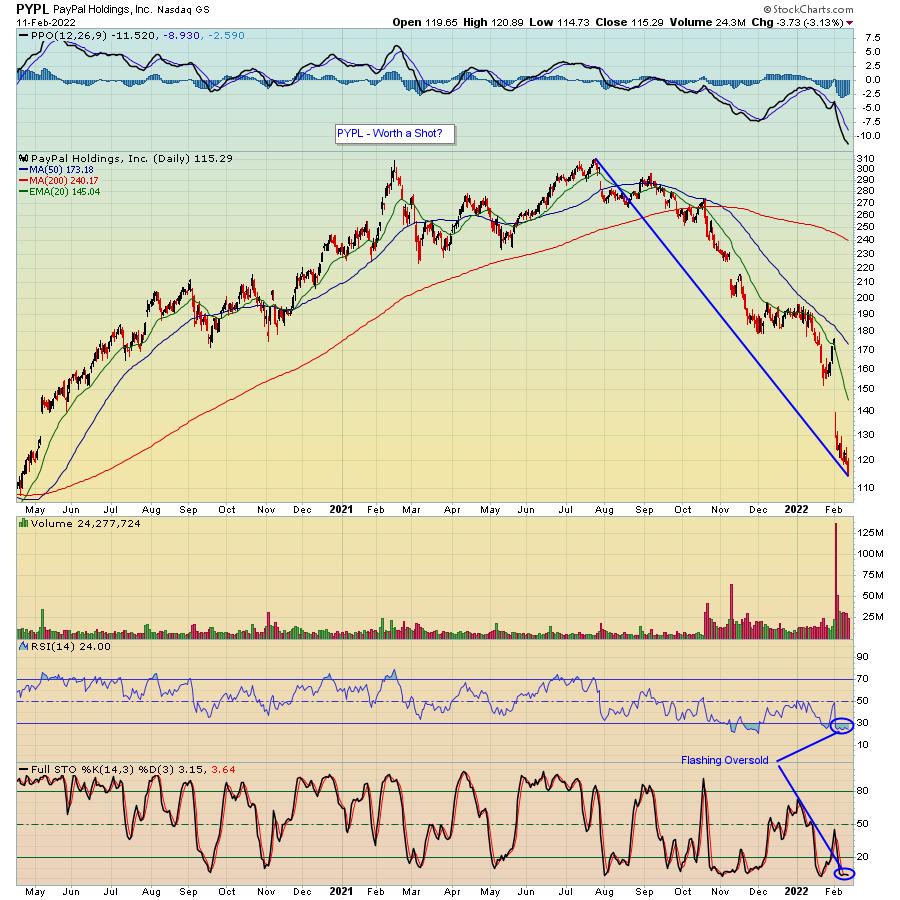 Will I ultimately come out ahead on any of the three buys? Time will tell. And these are NOT recommendations for anyone else. But I do like the idea of getting involved with companies with bright futures that have gotten pummeled for any number of reasons. If I’m wrong, I won’t feel as bad (especially in the pocketbook) as I might have felt had I bought any of them at their highs and rode them down to current levels. THAT would have been painful. And I won’t let things get out of hand; I’ll have reasonable stops in place in case I’m wrong.

In the meantime, this current bear market is going to create a lot of stress for a lot of traders. How bad might it get and what might we expect with this recent bout of selling? One way to find out is to join our Chief Market Strategist Tom Bowley when he conducts a VERY timely webinar this Saturday at 10:00am EST, “The Anatomy of a Cyclical Bear Market.” To learn more about how you can participate at NO COST, just click here.

The wild rides we’ve seen in the market are likely to continue for a while; there’s no telling how low the major indexes will go. But if you keep your wits about you, it’s possible you will find opportunities that did not exist even a few months back. Be careful to protect your capital in case things go against you, but remember also that the majority of traders like to pile in when things look the brightest and go into a shell when things look their worst. Maybe trying to find something in-between isn’t a bad idea.