California doesn’t report monthly inventory numbers, but they do report the change in months of inventory. Here is the press release from the California Association of Realtors® (C.A.R.): Rising interest rates depress September home sales and prices, C.A.R. reports

The statewide median home price continued to increase on a year-over-year basis in September, but the growth rate remained very mild compared to those observed earlier this year. At an increase of 1.6 percent year-over-year, September marked the fourth consecutive month with a single-digit annual increase. … With closed sales dropping more than 25 percent and pending sales falling over 40 percent, active listings have been staying on the market significantly longer, which contributed to a surge in for-sale properties by 51.5 percent in September. 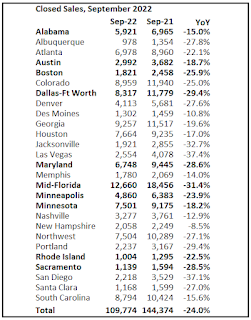 In September, sales were down 24.0% YoY Not Seasonally Adjusted (NSA) for these markets.

There is much more in the article. You can subscribe at https://calculatedrisk.substack.com/